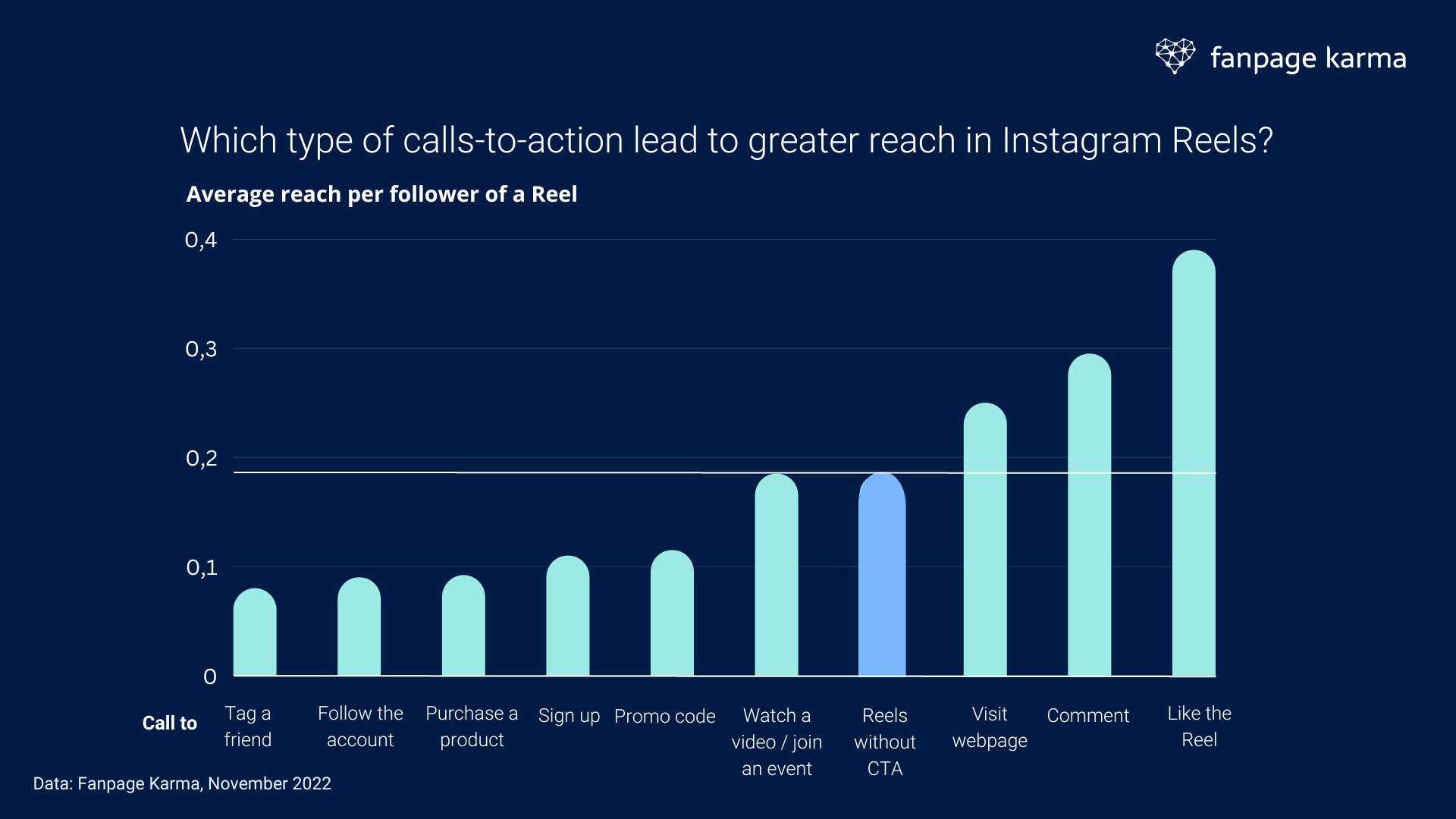 Instagram is all about Reels these days. Unlike posts or stories, Reels are more often played out to users who don’t yet follow your profile. This offers companies a great opportunity to increase their reach and expand their target audience. But what makes a Reel successful?

In an extensive study, we examined 540 Reels for the 100 most widely spread theories of what makes a Reel successful. In today’s article, we look into the subject of how promotional actions and calls-to-action influence the reach and interaction rates of Instagram Reels.

Do not engage in obvious advertising

Many companies and influencers use Instagram Reels as a sales tool. But our study shows that if a Reel contains advertising for a product, its reach drops drastically. Reels without advertising reach almost twice as many people as Reels that contain advertisement. Regardless of whether the content of the Reel is exciting, creative, or inspiring.

The same happens with viewer interactions (average likes, comments and shares per Reel): They even plummet by 75 percent.

Logos and slogans in Reels are considered advertising

Many companies display their logo or slogan at the end of a Reel.

Our research shows, however, that viewers regard such Reels as advertising, too, which is why they perform similarly poorly as Reels with indirect advertising. On average, one has to expect a 36 percent lower reach and 70 percent lower viewer interaction rates than with Reels which don’t show a logo or slogan.

Beware of calls-to-action in Reels

It may therefore be better not to show the viewer the company logo at the end of the Reel, but instead ask them to perform a specific action. Such asks are called “call-to-action” and are widely regarded as a means of increasing interaction and reach. Our study shows, however, that this conventional wisdom is not universally true.

Whether the call-to-action is shown or spoken in the Reel itself or whether it is placed in the caption, does not really make a difference. The former shows slightly higher reach, the latter demonstrates slightly higher post-interactions.

But not every call-to-action is the same. That’s why we dove deeper and examined different kind of calls-to-action in order to see if there are one or two which do lead to higher reach.

These calls-to-action do not improve your Reel’s reach

Our study revealed that Reels that contain invitations to tag friends, to follow the account, or to purchase a product reach the fewest people. The reach of such Reels is between 60 and 65 percent lower than for Reels without these prompts.

Reels with discount codes as well as prompts to register do not perform much better. Compared to Reels without these calls-to-action, they achieve only half the reach on average. And even Reels with a call-to-action to watch a video or participate in an event indicate a 25 percent loss in reach.

Calls-to-action that lead to greater reach

Other calls-to-action, however, work very well. For instance, there is no loss of reach with Reels that contain an invitation to visit a website. On the contrary, those Reels reach nine percent more people than Reels that do not.

Reels with prompts to comment even show a 43 percent higher reach per follower than Reels that do not contain these prompts.

And Reels with a call-to-action to like the Reel demonstrate 86 percent higher reach on average.

Conclusion: A lot of potential is wasted

Our research shows that currently only three percent of Reels contain a call-to-action to visit a website. This is wasted potential because providing additional information on your website is well received among Instagram users. It is best to include links in your bio, combined with a Reel that shows a snippet of that information and a call-to-action for your audience to continue reading on your website.

However, if high engagement for your Reels is just as important to you as a large audience, then try focusing on prompts to comment.

Use your Reels as an impetus for a conversation with and among your fans. Use different invitations to do this, for example:

And if, on top of that, you set yourself apart from your competitors by being more subtle in your advertising or even by not advertising at all, then you are on the fast track to Reel success. And you will experience that your fans will be more open to your message…

With that in mind: Are you currently using calls-to-action in your Reels? And how are you going to encourage your audience to comment from this point forward? Let us know in the comments!