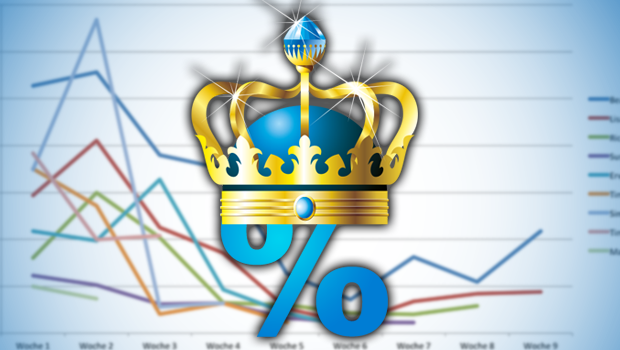 Social media manager and online marketing experts are discussing which KPIs really work to measure success on Facebook since years. How important is the number of fans? How meaningful are engagement and interaction? And, this is a major question: How close are fan activities on Facebook to their behavior and decisions in real life?

The current Fanpage Karma study shows: One of the most important KPIs to realistically measure activities on Facebook is the Page Performance Index (PPI), it combines fan interaction and page growth. Another extraordinary result of the study: For a successful performance in real life it doesn’t matter at all how many fans on Facebook you have.

For the study we surveyed “Deutschland sucht den Superstar”, the German version of the TV casting show “American Idol”. Therefore we analyzed the Facebook pages of the last ten candidates during the last ten weeks of the show. The viewers decide who must leave the show every Saturday. So we measured the Facebook activities of each candidate from Saturday to Saturday and compared our results with the actual results on TV. After the show ended we received the final numbers of the public voting and compared them with our results.

This is how we detected three significant facts about Facebook usage:

We could predict who is going to leave the show in almost every single week. Just in week 3 the one who was voted off wasn’t the candidate we expected to be.

In addition we knew way earlier who is going to win: According to our calculations  Beatrice Egli, the “German Idol”, was number one in nine of ten weeks. And this matches exactly with the real voting results, which were published afterwards from RTL, the TV channel the show runs on.

How we did the calculation: The KPIs we took to measure success were Page Performance Index (PPI), growth and engagement. Engagement measures the likes, comments and shares per day in relation to the number of fans. The PPI combines this with the growth of the page in relation to the number of fans. From week 4 on the PPI and the real voting results matched statistically significant every single time.

And this means secondly:

2. The PPI is an effective KPI

Who works in Facebook marketing knows how important it is to find valid KPIs. Now we finally could prove that the PPI really works. It was the most accurate value with the highest statistically significant correlation.

The PPI shows how engaged the Facebook fans are, how big the interaction on the page itself is and how fast it grows. The higher the value the better it is. Plenty engagement and high growth rates show vitality and interaction of a fanpage. This is related together and can make the difference between success and failure.

The fanpages of the TV show candidates are a very good example to work with since they gained a lot of popularity within just a few days. The PPI showed the following after the first airings:

PPI, engagement and growth are the most valid KPIs, which allow you to draw conclusions on actual events. Furthermore we could finally prove something everyone is talking about.

3. The number of fans doesn’t matter at all

While those KPIs matched with the actual results week by week, the number of fans didn’t show any correspondence at all. There is no correlation between number of fans and voting result in any of the ten weeks. In fact the winner Beatrice Egli had less fans than her competitors even until the finals. The three candidates with the biggest amount of fans were Ricardo Bielecki, Erwin Kintop and Maurice Glover. Maurice got the fewest viewer votes in week 3, Erwin left in week 5 and Ricardo was among the last three – but had to leave then despite having way more fans then the two girls.

What are the conclusions? Apparently Facebook is not about the amount of fans. The number of fans doesn’t influence real events. Talking business, it means just because a Facebook page has a lot of fans it doesn’t mean they would buy or support your product. What really counts is engagement and growth. A Facebook fanpage benefits from active fans. It is way more important that something happens on the pages and that the content is liked, commented and shared by the fans. Because then, and this is what we proved with the study, Facebook is not just a toy or a separated online universe. It is part of the real world.

All calculations were made with Fanpage Karma. Fanpage Karma is an online tool used to analyze Facebook pages. Users can monitor an unlimited number of Facebook pages. Either their own page or those of competitors. Fanpage Karma provides valuable insights on posting strategies and performance. It gives hints on how to improve engagement. The analysis includes best posting time, best performing post types, top supporting fans, topic analysis, link sources, an extended posting history with engagement and much more. Try it for free here www.fanpagekarma.com