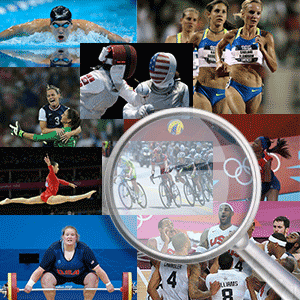 Tomorrow is International Olympic Day. It commemorates the 1896 Olympic Games in Athens, which were the first summer Olympics held in the modern era. The last Olympic Games, held last August in London, were dominated by the United States who had a total of 104 medals, 46 of which were gold. In recognition of their success, we have ranked the Facebook fan pages of 187 US Olympic athletes and analyzed and compared them to see who communicates best with their fans, and who needs to work on their engagement skills.

As probably expected, the Olympic athlete with the most number of fans is also an NBA star. Kobe Bryant, gold medalist on the US Olympic men’s basketball team as well as a famous Lakers player, has 15.9 million fans. Although we can all agree that his presence in the Olympics isn’t the main factor behind his fan page popularity, when looking over the history of his fan page, we see that there is a slight increase in his growth rate in August 2012 after the Olympic Games in London.  So it looks like his participation in the Olympics did affect his performance on Facebook, as he also had a higher number of people who were “Talking About” him and an increased Page Performance Index, or PPI, during that time period.
Just because Bryant has the most fans, it doesn’t necessarily mean that his fan page is better than others. What factors make one fan page better than another? Some, like us here at Fanpage Karma, would argue that the engagement rates and Page Performance Index are just as, if not more important than size. They are a good way of evaluating how well a fan page connects with their fans. The average engagement rate is 0.3% and the average PPI is 21%. Timmy Duggan, an Olympic cyclist, has the highest engagement rate with 4.2% and a 100% PPI. Posting too often can be annoying for fans, but it seems as if Duggan’s average of 2.1 posts per day is working in his favor. He posts mainly links and status updates to engage his fans, as you can see here, and his picture posts, such as this one, get quite high engagement rates.
About 70 fan pages, or around 37%, of the 187 pages listed had an engagement rate of 0%. Because only the last 90 days are taken into account, it is quite clear what the reason behind such low rates is. The Olympics took place in July and August of last year. Since then, all the hype over the Olympics has died down and so the athletes don’t have much to update their fans on anymore. For example, archer Jennifer Nichols’ last post was on August 5th of last year and rower Sarah Zelenka’s last post was in early September. It’s a shame they don’t keep their fans up to date, because they are only losing out. If they put a bit more effort into their page, they could increase their fan base and satisfy their existing fans.
On average, the growth rate for the Facebook page of an Olympian is 0.58%. Carmelo Anthony, another Olympic basketball team member and Knicks player, is in the lead in terms of fan page growth and yet, interestingly, all of the posts by fans on his wall were ignored by him. Our recent study shows that high engagement rates have a positive effect on growth rates. With an engagement rate of only 0.1%, we can conclude that, in this case, it isn’t the reason behind his successful growth rate. Perhaps it is affected by what is happening in his career. By examining his fan page history, we see that his page witnessed a large increase of fans between February and March of this year. If his growth is directly related to his career, then was it because of his knee injury the Knicks player suffered or the fact that he recently retired his #15 Syracuse Jersey that sparked the sudden interest in his page?
When comparing two of the best US swimmers, Michael Phelps and Ryan Lochte, we see that Michael Phelps has considerably more fans. After winning more medals than any other Olympic athlete in history, this was no surprise. Yet with a difference of over 6.8 million fans, they both have the same engagement rate of 0.1%, which justifies our study that smaller fan pages don’t necessarily have better engagement rates.

When examining the Olympic Taekwondo siblings Diana and Steven Lopez, Steven clearly has a lot more fans with 31,806 compared to his sister with 20,770. They have equal engagement rates of 0.1%. The only real action their pages saw in the last 30 days was one status update each. Steven congratulated his sister’s victory in qualifying for the World Championships, which got 607 likes, 58 comments and 14 shares, while Diana did the same and praised her brothers for making the US National Team, which got 410 likes and 47 comments. Apparently their fans like to hear more about the other sibling, which means that their fans should either like both sibling’s pages, or Diana and Steven should switch and manage each other’s fan page.  Both siblings use the word “Team” very often, yet it receives higher engagement from Diana’s fans than it does from Steven’s.
All data was taken from Fanpage Karma. To try our free analysis click here.

If you want to use this ranking on your own website, use this embed code: