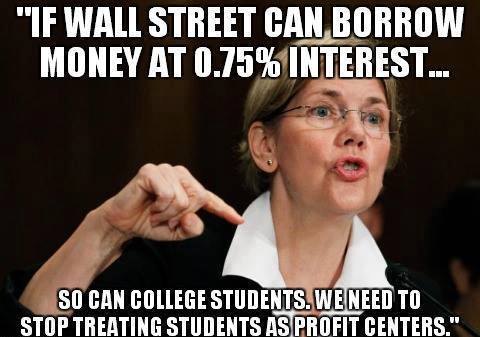 The top posts of this week have a vast amount of different topics. Unlike expected, the olympics play a rather unimportant role. Even though the U.S. having won multiple medals already, barely any posts can be found. It seems that only a few americans are interested in the event which is pretty weird considering the fact, that only Canada covers the olympics more excessively than the U.S.

People apparently are too busy talking about the Super Bowl and the trashing the Seahawks received. The Facebook community still celebrates the victory… …but also seems to enjoy making fun of the losers. A post by Curtis Grimes knocked everything out of the park. It received approximately 12times as many reactions as the page has fans. An impressive accomplishment.

Patriotism was a popular topic as well. Multiple posts made it into the ranking, here are the 2 most successful ones. I want to know what my fans think.

“This is not a meme – it’s a quote”. U.S. Senator Elizabeth Warren’s statement about the current dilemma american college students find themselves in received a lot of positive feedback and made it into the Top-Posts multiple times. This is not a meme – it’s a quote. And a damn good one at that. #wtfAmerica This explains a lot.

This is not a meme – it’s a quote. And a damn good one at that. #wtfAmerica

Happy birthday from NBC Charlotte to one of our favorite viewers, Helen Morris! She turns 105 today! Tap ‘Like’ to wish her a happy birthday!

Today, we’ve announced that we are ending the sales of tobacco in all 7,600 CVS/pharmacy stores by October 1. As a health care company, it’s time for us to take a stand and to put our customers, colleagues and patients on a path to better health. Share this if you stand with us in our commitment to go tobacco-free. Learn more: http://bit.ly/1lAcT0Y

IT’S COMPETITION TIME! Just like and share this post for your chance to win all these valentines goodies! The prize includes:• A Necklace & Earrings set from Warren James Jewellers• A Valentines meal for 2 at Café Rouge• A Valentine Build-A-Bear Workshop teddy• Nicki Minaj’s new perfume Courtesy of The Perfume Shop• A Yankee Candle set and Me-to-you bear courtesy of Clintons• And a choco…

We are feeling super sentimental this afternoon… Let’s all take a moment to remember the angels in our lives…In honor of your special angels, we are giving away TWO beautiful pairs of today’s deal: HUGE Angel Wings! Two, you may ask?! Yes, one for you and another for a friend.Like our post and tag a friend in the comment section below, and you will be entered to win two pairs. Tag as many f…

This Coca-Cola Super Bowl ad angered some and inspired the hashtag #SpeakAmerican. Brenda Wood 11Alive calls the outrage outrageous. What do you think? WEIGH IN: http://on.11alive.com/1coFVvq and SHARE.

We’ve significantly dropped our data rates! To coincide with this joyous launch, we’ve written you a compelling haiku:Ting data pricesstreak the heavens as they fallFrugal meteorsTo celebrate, we’re giving away a slew of prizes to those who both share and comment on this post. You can win one of the following:Nexus 5 (x2)$100 in Ting credit (x5)$5 Starbucks Gift Card (x150)…

We have slashed our data pricing – Ting.comting.com

A one, two punch of winter on the way. Winter Storm Watch is in effect for counties along and north of I-20 all the way to the TN, NC border beginning Monday evening and lasting through Wednesday morning. A Winter Storm Watch is also in effect for counties south of I-20 for Tuesday night through Wednesday morning. The first wave of wintry weather will occur overnight Monday through early Tuesda…

Now that the Super Bowl is over…Who’s ready for the Olympics to start?!

We wouldn’t advise missing all of that. <3#missedabilities

The moment we all fell in love with Ryan Gosling!!

Like this post for a chance to win a luxurious Valentine’s Day Chambord, Champagne Perrier-Jouët and chocolate hamper. The winner will be chosen at random. Closes 11/02/14. T&Cs apply. https://www.facebook.com/chamborduk/app_339100189563350

A man, upset after hearing about a Utah school that trashed lunches for students with delinquent lunch account balances, paid off 60 negative lunch account balances at a Houston elementary school.”These are elementary school kids,” he said. “They don’t need to be worried about finances. They need to be worried about what grade they got in spelling.”

Man pays for 60 children’s school lunches after they were thrown outvia.fox2now.com

Watch the amazing moment where a British plumber caught what could prove to the biggest wave ever surfed.

GREAT NEWS! 3 local K-9 officers are now wearing bulletproof, and stab proof vests after a donation paid for them! The donation comes just over a week after #Rocco was killed in the line of duty.DETAILS: http://cbsloc.al/1jiTEamLIKE and SHARE the wonderful news, and you can even help donate!

A Texas school mentor saw dozens of children eating cold cheese sandwiches instead of full trays of food because of the negative balances on their lunch accounts. He decided to open up his wallet and help, paying over $400 to help more than 60 children. “The best money I ever spent,” he said. Let’s give him some LIKES! Watch here==>> http://www.foxcarolina.com/video?autoStart=true&topVideoCatN…

What does Mr. O Jay Cutler have planned for Valentines Day?

Monday May Giveaway! LIKE this post before 10:00pm (PST) for your chance to WIN four 2014 Silverwood May Tickets. Double your chances by answering the question “Would you rather sit in the back or the front of Timber Terror?” Comment your answer below and winner will be randomly selected tomorrow. Good Luck!

A man risks his life to save a fawn from flood waters. Please SHARE if you think this man is a hero!!! <3

Today marks Dietrich Bonhoeffer’s birthday, a German theologian known for his stand against Adolf Hitler and the Nazi party. As we honor the memory of Bonhoeffer, it’s crucial to remember that we also have the privilege and responsibility to engage in the public square. Read more: http://alln.cc/1fDmZZY-

In celebration of the Olympic Games, we’re sharing the stories of trailblazing women athletes of the past and present — many of which show how far girls and women in sports have come in only a few decades. Kathrine Switzer’s experience as the first woman to officially run the Boston Marathon is a dramatic illustration of these advances. In 1967, Switzer was a 20-year-old college student at S…

This explains a lot.

For the first time in five years, the ice on Lake Superior is thick enough to visit the spectacular sea caves of Apostle Islands National Lakeshore in Wisconsin. Inside the caves awaits a fairyland of needlelike icicles. The formations change from chamber to chamber and from day to day. Apostle Islands is experiencing high volume of visitors right now, so we recommend that you visit the caves d…

Duke Energy told us their coal ash ponds were safe, but they were wrong.On Sunday, a pipe underneath an unlined coal ash pond in Eden, North Carolina shattered and released 82,000 tons of highly toxic coal ash into the Dan River, which provides drinking water for residents. And what’s worse? This wasn’t reported until Monday night, and the story just came out TODAY.SHARE & Read more: http:/…

Wow – more than 10 000 caring Australians took to beaches around the country on Saturday to say no to WA’s outrageous shark cull policy!A MASSIVE thanks to everyone who came along. If you couldn’t make it, you can still take a stand against this brutal policy by sending a message to WA Premier Barnett today: https://www.greenpeace.org.au/action/?cid=60&src=FB9

When you know the story behind the photo, it makes it all the more special. Vista was found as a wild-born orphaned cub in the Calif. wilderness. She has significant neurological problems that affect her ability to walk and have caused her muscles to atrophy. It’s moments like this we work so hard for. Vista deserves a LIKE and SHARE, doesn’t she? She’s come so far. Her story and more photo…

God will not give you more than you can handle. If you face a big challenge, you have a big destiny.

I want to know what my fans think.

Over the top bench shared by The Good Chevy page =D

I’m not saying I was nervous, but….

Timothy Tuesday! Eagles released “I Can’t Tell You Why” on this day in 1980 with Timothy B. Schmit on vocals…

Eagles – I Can’t Tell You Why (Written by Schmit, Henley, Frey)youtube.com

At Mother’s and Dad’s house in Houston

GREAT NEWS ABOUT A GREAT GOD: Greetings from the other side of the Valley : ) Well things are progressing unexpectedly well. I met with my Doctor on Tuesday for a routine check up and heard some great news. The last dose of Chemo (Melpholine) on Jan 16 was pretty brutal but within 10 days I was recovering much faster that I expected. The pneumonia virus …

It sickens me that Schapelle Corby’s about to make more money selling her story of being a fucking idiot, than most teachers/nurses make in their working lives.

I apologize to any Bronco fans who hate this. It made me laugh! – Lindsey On the Radio (Lindsey Armstrong)

[SHARE] This is how we respond to Punxsutawney Phil. For local #TampaBay news and weather, be sure to make –> www.wtsp.com

WE DID IT!!! SHOUT IT OUT LOUD 12s!!!See more game news in PHOTOS >> www.kiro.tv/1agR8y6Like KIRO 7 Eyewitness News on Facebook for complete team coverage of #SB48.

This might be one of the most adorable things I’ve ever seen. Classic imitation by Husky.

Congratulations to Tracy and Kliff on the arrival of their triplets, sons, born January 11, 2014!!! 🙂

The Most Amazing Mother Son Wedding Dance EVER!!! :)Please Share

Yesterday marked the one year anniversary of Navy SEAL Chris Kyle’s death. Chris was the most lethal sniper in U.S. military history and a true American hero.

Anyone else do this?

Backpacker and world traveler Bill Passman has a tattoo of the world. He colors in each country as he visits them for the first time. http://www.incrediblethings.com/travel/mans-back-tattoo-shows-his-travels/

Check out this collection of #Disney themed cocktails from Cocktails by Cody! Which one is your favorite?!http://www.disneyfoodblog.com/2014/02/06/disney-themed-cocktails-why-didnt-i-know-about-this/

Fish films for the imaginative.

Do it for the vine

Thats How You WorkoutLike Funniest Vine Videos For More