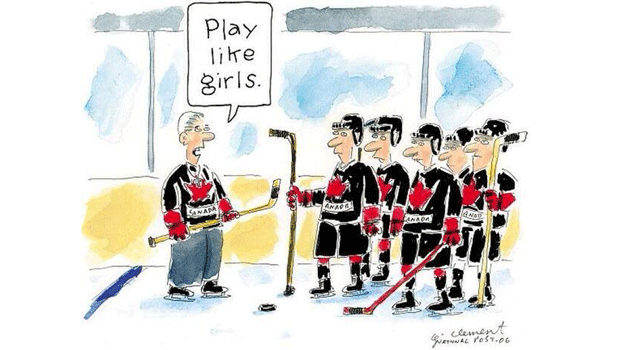 Yesterday the olympics ended. With Russia claiming first place and the US squad disappointing by losing against Canada one might assume that most English speaking Facebook users would just ignore the event. But that’s not the case, probably because, fortunately for us, (some) Canadians are English speaking as well.

Two major topics this week: The 2014 Winter Olympics… and food.

But first things first: The most successful posts have nothing to do with either topic. Granted, they are somewhat sports related, but the focus is rather on their humorous value. I am a runner, but this still cracked me up!

Moving on to soem delicious snackas. Today on our Fanpage Karma Menu, we have Tater Tots as appetizers… Tater Tot Casserole Recipe1 to 2 lbs. hamburger, browned and seasoned to taste1 pkg. dry onion soup mix8 oz. sour cream20 oz. frozen mixed veggies, or leftover veggies*1 can cream of mushroom soup2 lb. bag of Tater Tots8 oz cheddar cheese or cheese of choiceGently mix all together but cheese and place in a greased 9×13 pan. Sprinkle with cheese. Bake at 350° for 1 1/2 to 2 hours.*Ke…

…a pizza as entrée… It’s #FreePizzaFriday! Just Like or Share this post for the chance to win a large single-topping pizza!3 winners will be announced at 5pm EST. Good luck!

…and a strawberry cake for desert. Thumbs up if you’d like a bite of this no-bake berry dessert! http://myphil.ly/1iVz93l

But how do you get rid of all these calories again? Doing sports would be a solution, but that involves actual effort. So why not just watch other people perform well at the olympics? After a close match of ice hockey you will probably end up nearly as exhausted as the athletes. IT JUST GOT SERIOUS!!

I am a runner, but this still cracked me up!

A truly historic night for Meryl Davis and Charlie White! Click LIKE to congratulate the newest Olympic champions! We are so proud of them!

MISSING CHILDREN: A Florida MISSING CHILD Alert has been issued for 12-year-old Erin Pena, 7-year-old Derick Pena, and 8-year-old Steven Pena. Officials say Erin was last seen wearing a blue polo shirt, khaki pants and gray and orange tennis shoes. Investigators say the children were last seen in the Miami area and may be in the company of Carrie Weingarth, a white female, 32 years old, 5’1 13…

It’s FREE Pizza Monday to celebrate Random Acts of Kindness Day! We’ll randomly select 10 people and send them a free pizza coupon. Just make sure you like and share this post.

Tater Tot Casserole Recipe1 to 2 lbs. hamburger, browned and seasoned to taste1 pkg. dry onion soup mix8 oz. sour cream20 oz. frozen mixed veggies, or leftover veggies*1 can cream of mushroom soup2 lb. bag of Tater Tots8 oz cheddar cheese or cheese of choiceGently mix all together but cheese and place in a greased 9×13 pan. Sprinkle with cheese. Bake at 350° for 1 1/2 to 2 hours.*Ke…

THIS COMPETITION HAS NOW CLOSED. Thank you!Winner is Meranda Wark

Music will always be a companion.

LOL: Nobody Is Safe! Guy Drops Baby Girl with The Crossoverfacebook.com

SOCIAL MEDIA QUESTION OF THE DAY: Spanking your children is not a new concept, but a proposed bill in Kansas about spanking is raising some eyebrows. Kansas’ proponents of the bill say kids are losing respect for authority. They say parents need to be able to discipline without fear. Under the proposed law, parents, or anyone with parental permission, would be allowed to spank hard enough to le…

Spring has sprung at Mumm Napa and to celebrate, we want to give you $2 off your next bottle! Head on over to the “A Toast to Spring” tab next to Events and enter your name and email to receive the coupon. Share this and spread the word!

It’s #FreePizzaFriday! Just Like or Share this post for the chance to win a large single-topping pizza!3 winners will be announced at 5pm EST. Good luck!

Freshly juiced on Monday, cold-pressed on Tuesday. Healthy doesn’t have to stop at home.

Ok. Fess up. All of you cat owners do this too, right?

Thumbs up if you’d like a bite of this no-bake berry dessert! http://myphil.ly/1iVz93l

We got sent this boxing tutorial video and quite enjoyed it.

“They took our shovels and told us we were not needed. They told us to go in our house and rest and that they would remove all the snow from around our car.”The above is a quote from a letter praising Police Officers Galvani and Smith of the 109 Precinct in Queens for their kindness to Arnold and Theresa Lederer whose car had been buried in the snow. The two officers observed Mr. Lederer, 98,…

**UPDATE**: For those of you who remember the story of Jahi McMath who went in for a routine tonsillectomy but resulted in being brain dead, her mother released a statement saying that Jahi is doing “much better physically” and “sees changes in her daughter that give [her] hope.” Remember her here —>> http://bit.ly/1iliohq

New-Born Baby Does Not Want To Leave Her Mother. Something Wonderful (Must Watch & Share)More Video Join Funniest Video Ever

New-Born Baby Does Not Want To Leave Her Mother!! Must Watchfacebook.com

The woman who breathed life back into this 5-month-old boy and the Miami Herald photographer who captured the harrowing scene: http://abcn.ws/1gnf3ds

The Church Of God In Christ, Inc. would like to wish Mother Willie Mae Rivers, International Supervisor of Women, a very Happy & Blessed Birthday! Please take some time to wish her Happy Birthday here and on her birthday blog: http://www.cogic.org/blog/happy-birthday-mother-willie-mae-rivers/ #COGIC

BREAKING: The Federal Court has just UPHELD the 2012 ban on fishing super trawlers like the Abel Tasman (Margiris) operating in Australian waters. SHARE this post to spread this great news far and wide!Today’s decision is a relief, but what we need is a permanent ban to keep these unwanted monsters away for good.#NoSuperTrawlers

OUTRAGEOUS: Duke Energy is sorry for dumping 39,000 tons of #coalash into the Dan River in North Carolina — but they’re not sorry enough to pay for it themselves.Instead the cost will fall on the backs of ratepayers instead of shareholders or Duke Energy itself. Read more & SHARE if you think this is ridiculous: http://bit.ly/1nOpNUM

“Set your minds on things above, not on earthly things.” — Colossians 3:2

The Wilderness Society shared a picture 2/20/14

We thought you might enjoy this photo of wildlife on our public lands. This comes from Okefenokee National Wildlife Refuge, GA., by Graham McGeorge via the U.S. Department of the Interior. For tips on birding on public lands, go here: http://bit.ly/1aX4Qa0

Our final day in Sochi & what a journey it’s been! To our amazing teammates, #Sochi2014 volunteers and the supporters at home, thank you!!!

Sorry I missed the call with Laura and Marie today, Miss Willow Grace DT decided to make an appearance instead! 6lbs 8ounces of sweet little girl.

Please allow me this personal note, because so many of you have asked about my Mother-in-law and her recent battle with cancer. During the past two weeks we have felt your prayers lifting my family up and I wish I could thank everyone of you personally. Your comments are treasured and appreciated. Here is the post from my wife’s FB page:It is important to my mom Carolyn Henson that this messa…

Feels like Spring today, so my palette has followed suit.

Thank you all for your patience. As promised, I will be making my big announcement tomorrow. Since I kept you all waiting for so long, I am giving away another signed copy of Million Dollar Listing! All you have to do is like this post, comment the city you live in, and share the post! Tomorrow I will choose someone at random and announce the winner. Good luck!

We’ve been dreaming of skating on Olympic ice together for the past 10 years. The feeling is truly stirring and unforgettable! #ShibSibs

Is your house “lived in”, or do you prefer things to be nice and neat and everything in its place?

But his heart is in the right place. 😉

#Breaking: An Amber Alert has been issued for a 10-year-old girl who was abducted from a Springfield, Mo. neighborhood after a man pulled her into his truck this evening. *SHARE THIS PHOTO*More Information: http://bit.ly/1ff7CqL

Do you have a pawprint on your heart?

[SHARE] Check out the warmer temps we’re going to see for the rest of the week –> http://on.wtsp.com/10weather(y) Like WTSP 10 News for weather forecasts and fun in your newsfeed!

If you are 7 and running away from home, here is the way to do it in style….posted by hotrodjim…hrj

IT JUST GOT SERIOUS!!

It’s National Drink Wine Day, apparently. You don’t have to tell us twice… Click here to buy the ‘Wine Is The Answer’ print >> http://bit.ly/1gRH52p

Me and My Shadow…

BEYONCE NEEDS TO SEE THIS. HE SNAPPED.

The BANNED Super Bowl Commercial You Haven’t Seen Yet!