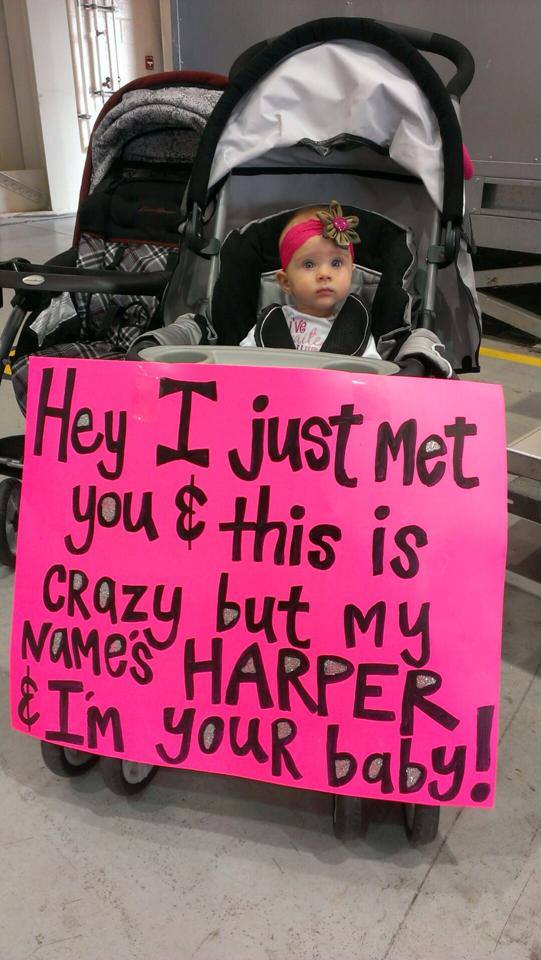 The most successful post of this week reached a level that is rarely seen. This picture of a little girl who was waiting her father at the airport took Facebook by storm. AWWWWW! Cole Tesar, a soldier from Bellevue, got home yesterday. His baby girl-he has never met-was waiting for him with this sign! “LIKE” if this makes you smile, too!Click here to read more –> http://bit.ly/1fELdyJ

The amount of feedback this picture got simply is insane. 1.6 million like, 90k shares with the page only having 77k fans. Twenty two times the amount of followers. Glad he got home safe to see this.

The Oscar selfie still was pretty popular last week. By now it is a known fact that it was a staged Samsung ad and not spontaneous at all. That doesn’t seem to bother the fans though. But there are also other Oscar related topics that received a lot of attention. Jared Letos speech was just one of them. But it definitely was one of the most emotional. Gracious speech by Jared Leto #oscarsLike Our Time if you support equal rights and add your name here: http://wefb.it/5zLptz

WCSX kicked it out of the park once again. Six times more people than the page has fans. Thats amount the of users who reacted to one of their posts this week. Can ya feel me? -Dave Dahmer

Classic Rock 101 was pretty successful as well though. In general, american radio stations seem to often understand what their users are looking for, something that helps them making it into the Top Posts most of the time. A pretty big accomplishment considering that we analyze all international Facebook pages there are. Have fun with the top posts of week 10.

AWWWWW! Cole Tesar, a soldier from Bellevue, got home yesterday. His baby girl-he has never met-was waiting for him with this sign! “LIKE” if this makes you smile, too!Click here to read more –> http://bit.ly/1fELdyJ

BIRTHDAY SURPRISE: A Rhode Island boy is celebrating his 7th birthday with more than 200 police cruisers and fire trucks. A parade arrived to pick up Tyler Seddon at his house just a few hours ago. Tyler has leukemia and his mother began a Facebook campaign to collect cards from firefighters and police officers for his birthday. The campaign went viral and this is what happened: http://bit.ly/…

Congratulations to @Matthew McConaughey and @Jared Leto for winning BEST ACTOR and BEST SUPPORTING ACTOR at tonight’s @The Academy of Motion Picture Arts & Sciences/THE OSCARS for their transformative performances in #DallasBuyersClub!

Happy Free Pizza Monday! We’ll pick 5 people and send them a coupon for a free pizza. Just like this post and share it if you want. Winners will be announced on Tuesday.

Recently, Ahmad “Real” Givens underwent another procedure called Gamma knife radiation to kill the tumor that spread to the left side of his brain. The tumor was small but was enough to cut the nerve damage off on the right side of his body.The Procedure was successful and he is getting all the feelings back to his body. He shares “Nothing is impossible when it comes to God Almighty.” READ Ahma…

When your best friend says they don’t have any friends

Anybody else feeling it too?

Hang in there. Spring is coming!

This little girl is a TRUE HUNTER! Watch how excited she is after getting her first deer. Savannah – I’ll tell you right now – that feeling never really goes away! Thanks to Jason Ashment for sharing the video on Youtube! Best thing we’ve seen all week. – Real Avid

+++ We are GIVING AWAY this fantastic T-SHIRT +++The person with the last comment will get it! Just comment (as often as you want) and within the next 3 hours I’m gonna comment “STOP” (at any time, could be in a few minutes, could also be just before the 3h are up)! The last comment before my “STOP” wins it!Good Luck! :)Special thanks to Tony Centeno for sponsoring the shirt! :)here you c…

Take part in the #MrTorque Challenge now!Mr. Torque is facing the first strong opponents today – and all of you now have the chance to take part online: https://app.scrmhub.com/u/4Lbh3rHave you already placed your bet?

FREE GIVEAWAY FRIDAY! We’re giving one lucky leprechaun a 5-pack of our “Lucky Sticks” cigars along with a lucky green cutter! Just LIKE and SHARE for a chance to win!And congrats to last week’s winner: Steve Gonzales (and his 3 lucky friends Cody Duty, Billy Smith, Dominic Calvillo)!

If you have children be the man that God has called you to be!#ManUp

In today’s “culture of waste,” this one might be relevant.

When Keshia Thomas was 18 years old in 1996, the KKK held a rally in her home town of Ann Arbor, Michigan. Hundreds of protesters turned out to tell the white supremacist organization that they were not welcome in the progressive college town. At one point during the event, a man with a SS tattoo and wearing a t-shirt emblazoned with a Confederate flag ended up on the protesters’ side of the fe…

The Washington D.C. City Council just voted to decriminalize marijuana! This means that, outside of Washington and Colorado, marijuana penalties are now less punitive in our nation’s capital than anywhere else in the country! Share this exciting news with your friends today!

We hope all of our Facebook fans will take a moment to visit our website to find out more about our mission at http://www.wildcatsanctuary.org/about/our-mission/. We welcome polite and respectful dialogue on issues but will remove anything contrary to our mission and the work we do daily. Thank you.

Some of my best prayers sound like this: HELP! – John Hagee Ministries

Common Core math: The equation at the bottom is a method of math problem-solving proposed by the Common Core program.

The Wilderness Society shared a picture 3/3/14

Sad but true. It’s clear some humans need a dose of Leave no Trace principles http://bit.ly/15cEs2LThanks to Sleeping Bear Dunes National Lakeshore for the message.

COGIC Morning Manna: How many are thankful for a Secret Place??? #COGICMorningManna #COGIC

Once a group of 500 people were attending a seminar. Suddenly the speaker stopped and decided to do a group activity. He started giving each person a balloon. Each person was then asked to write their name on it using a marker pen. Then all the balloons were collected and put in another room.The people were then let into that room and asked to find the balloon which had their name written on …

Great Monday Morning!!! I want to make sure that you put on your Monday smile and remind you to get your sleep. With my hours–when I fall out I really fall out. Ha!!!! My wife sent this to me with the caption “just in case you ever wonder if she looks like you..Lol.” Have a great morning. Let’s get it!!! #wsbtv

Money does not equal happiness!

Just wanted to share with you the viewers that my sweet and talented mother-in-law Carolyn Henson of Toccoa, GA passed away this morning. My wife, Lynn, was at her side everyday through this journey. I am proud of the example of the servant daughter she showed our daughters. Here is more on this incredible lady. We thank you for all of your thoughts and prayers.Carolyn McMurry Henson:It is …

The Awkward Yeti shared a picture 3/3/14

Who is the first person you thought of this morning?

Can ya feel me? -Dave Dahmer

Gracious speech by Jared Leto #oscarsLike Our Time if you support equal rights and add your name here: http://wefb.it/5zLptz

The best selfie of the Oscars. Wait no, EVER.

Not only the gesture by the gentleman donating the money, but wait until you see what the homeless man does. The compassion and love within people is not always limited by boundaries and can be unconditional. We just have to give it a chance. <3

Watch What This Homeless Man Does – Humanity At Its Bestfacebook.com

The shot seen around the world. This picture brought a lot of you to our corner and it’s never been the same since.#OurFansAreTheBest

How many likes for Skye?! 🙂

Live financial news feed on the situation in Ukraine

Live financial news feed on the situation in Ukrainebeta.tradingfloor.com

This just melts your heart…just beautiful

Wickedly heavy wave shared by Ancient Art of Stone who comments: Epiphany – Natural stone fireplace… in a bedroom on a mountaintop. www.AncientArtofStone.com =D

A US soldier at Ft. Carson, CO hid in her car to avoid saluting the American flag – and then bragged about it on Instagram! We think this is disgusting.

The Angry Bartender shared a picture 3/3/14

Dole Whips are back in Epcot! And you can get ’em spiked with rum or coconut!! #Doleicious

“When everything seems to be going against you, remember that the airplane takes off against the wind, not with it.” Henry Ford

FROZEN wins the Oscar! Broadway is next!

From the Oscars to Broadway! Frozen Wins Best Animated Featurebroadway.com

*Gasp* Chester and Gretel are in the same bed and they are tuuuuucccchhhhiiiiinnnnggggg! I think the sunbeam has paralyzed Chester so he can’t move away 🙂