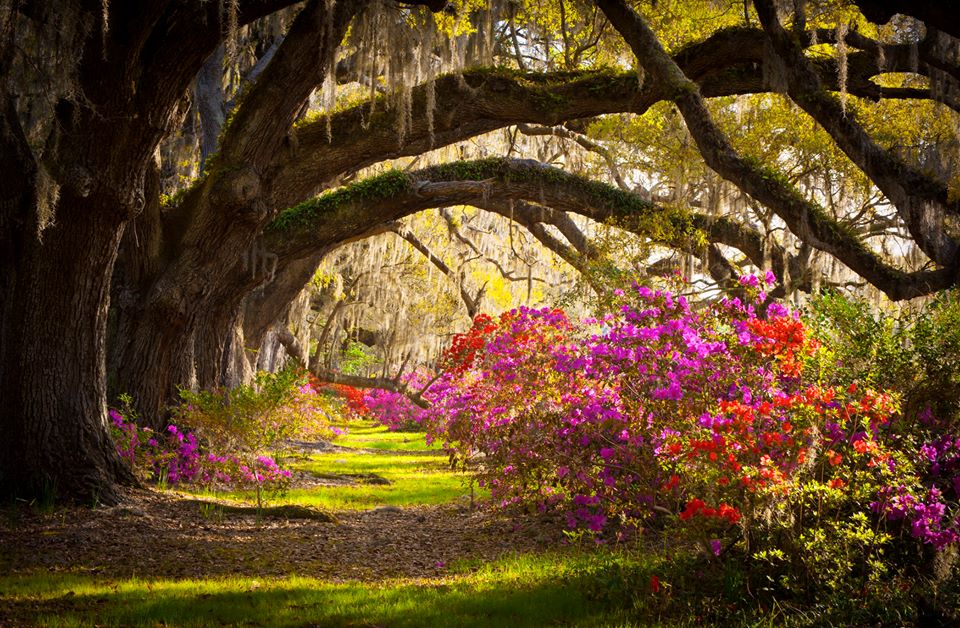 Winter is finally over and the first signs of spring can be seen. A couple of pictures already made it into the Top Posts of last week. A beautiful preview of what is coming and what most of us probably have waited for since autumn started. South Carolina in spring. As good as it gets. The Recycled Catholic shared a picture 3/19/14

Repost of a very popular post! I think our passed loved ones are enjoying visits to us this Spring. A cardinal is a representative of a loved one who has passed. When you see one, it means they are visiting you. They usually show up when you most need them or miss them. They also make an appearance during times of celebration as well as despair to let you know they will always be with you. Lo…

While we are talking about beauty, there have been quite a few princess related posts in the course of last week . They didn’t always involve girls though. This little guy wanted to attend a costume party as the Disney character Sleeping Beauty. Without any hesitation his parents bought him a fitting dress. The amusing part is that it weren’t his friends who had a problem with his outfit, quite the opposite. The parents of the other children on the other hand did.

Unfortunately for his parents he didn’t want to look like Cinderella, else they could have saved a lot of work. hehehe .. here is a solution to the problem of house cleaning.

Children were once again one of the major topics. This post caused a pretty big shitstorm. Seriously… isn’t this the cutest thing you’ve ever seen?

At first one might think that this was a successful post because of the picture, but that’s just partly correct. The real reason the post shot through the roof were the arguments and discussions based on the picture. More than 26.000 comments, the majority being negative. It would be really interesting to see how many people would have disliked this post if they were able to.

Whether the reactions are reasonable or not remains subjective, because if we always assume the worst to happen, having a dog as a pet wouldn’t even be an option.

Well, at least these people still care about their kids, while this father just abandoned his. Cruel world. [cta type=”small” img=”1″ url=”http://www.fanpagekarma.com/” text=”” color=”blue”]Get the Top Posts of the day every morning: Try it for free at Fanpage Karma![/cta]

Have fun with the top posts of week 12.

Second To None Nutrition shared a picture 3/22/14

We are proud to announce the first set of quintuplets ever born at Baylor University Medical Center at Dallas! Here is a statement from proud parents Steven and Michelle Seals:“We are so blessed to have welcomed five new members of our family into the world Tuesday afternoon – four girls and one boy – Mia, Tessa, Gracie, Rayleigh and Brant. They are all healthy and doing well. We would like t…

It’s absolutely PERFECT! – Couple takes photo every day of 9 months pregnancy. The result is beyond beautiful.

Couple takes photo every day of 9 months pregnancy. The result is beyond…lifesitenews.com

A lot can happen in just one day, are you making the most of your ONE day today?

This woman weighed 260 pounds when her husband was deployed. She decided it was time for a change.Misty lost more than 100 pounds by the time he returned, and that wasn’t the only surprise she had in store!

Absolutely INCREDIBLE! This video is NOT for the faint-hearted…

Competition alert! To celebrate our SPRING CLEARANCE SALE, here’s an extra chance to get ahead with your Spring Cleaning by winning the mystery Vax product in the image!To enter, share this post then simply tell us which Vax model we’ve obscured. One random correct answer will #WIN when the SPRING CLEARANCE SALE closes 5PM MONDAY, so get guessing!Clue: the product is one of many on offer in…

The Cornucopia Institute shared a picture 3/20/14

After years of predicting it would happen — and after years of having their suggestions largely ignored by companies, farmers and regulators — scientists have documented the rapid evolution of corn rootworms that are resistant to Bt corn. More here: http://www.cornucopia.org/2014/03/voracious-worm-evolves-eat-biotech-corn-engineered-kill The Cornucopia Institute #GMCorn #Corn #maize #GMOs #farm…

***Like & Share Competition*** & be in with a chance to win 2 tickets for ‘An Evening with Carl & Charlotte’Thursday 3rd April, H&C TV are hosting ‘An Evening with Carl & Charlotte’ at the Bacon Theatre, Dean Close School, Cheltenham.For your chance to win 2 tickets to this amazing event simply ‘Like’ our page and ‘Share’ this wonderful photo of Charlotte and Blueberry. The winner will be a…

This is Dan. Every Wednesday and Thursday, he heads to local Cancer Centers and purchases a cup of coffee for each patient, nurse, doctor and everyone in between — straight from his own pocket. Give him a LIKE for this awesome act. 🙂

South Carolina in spring. As good as it gets.

The Recycled Catholic shared a picture 3/19/14

Repost of a very popular post! I think our passed loved ones are enjoying visits to us this Spring. A cardinal is a representative of a loved one who has passed. When you see one, it means they are visiting you. They usually show up when you most need them or miss them. They also make an appearance during times of celebration as well as despair to let you know they will always be with you. Lo…

Yamaha Banshee running from the cops. Love how you hear the Banshee nail it when the cop turns around lol.

FREE GIVEAWAY FRIDAY! This week we’re giving away 5 amazing sticks from Cigar Aficionado’s Top 25 list – all rated 90+! Just LIKE, SHARE, and COMMENT with which one is your favorite for a chance to WIN!And congrats to last week’s winner: Michael Davis!

Australia could soon be taking leaps and bounds for bunnies, guinea pigs and countless other creatures by banning the sale and import of ALL cosmetics that have been tested on animals! While cruel tests involving the burning, poisoning and blinding of animals for the sake of cosmetics do not occur in Australia, there is currently no Federal law preventing animal testing or stopping companies …

I came across this meme the other day and thought I’d share. I grew up on these cartoons too. Im curious about everyones opinion. What changed? ~Scarlet

Hundreds of thousands of you have helped raise over £1 million (and counting) posting your #nomakeupselfies and donating to help beat cancer sooner. We’re overwhelmed by your incredible support. Our #nomakeupselfie, Dr Kat, and breast cancer survivor, Sarah, want to join us in saying a huge thank you to all of you. Your support will help save lives. If you want to get involved, you can here: ht…

Thankful for the Favor of God! #COGIC

Dame Maggie Smith seemed like a natural fit to play the no-nonsense Professor McGonagall in the Harry Potter movie series. What many people don’t know is that, during the making of “Harry Potter and the Half-Blood Prince,” Smith was battling breast cancer while still keeping up with a rigorous filming schedule.The two-time Oscar winner discovered the lump in her breast in 2008. Speaking to Th…

Yes, indeed! It happens in every home. Those socks go in as buddies, but how soon they forget! 🙂

When you are down to nothing, God is up to something! – John Hagee Ministries

Lisa, a photographer, happened to see a zoom lens on our wish list. She contacted us to let us know she’d be happy to donate it to us. Since our habitats are so large, now we’ll be able to zoom in to capture some more amazing photographs to share with you – like this one of Sabrina, our tigress. This is a gift we’ll all enjoy for many years! THANK YOU ♥ Wish List: http://amzn.com/w/1MICD0XWO…

A negative mind will never give you a positive life.more at Motivation Live

Einstein was on to something…

After a very long trip we finally arrived back at home. And here is the first picture of my faun cosplay. More photos of me and my faun partner will follow soon <3

GET YOUR GRANDMA!!!! xoxoxo – GloZell

hehehe .. here is a solution to the problem of house cleaning.

Trooper critically injured in turnpike crash is improving. LIKE to wish him well! http://bit.ly/1l0ZTk5

The latest season of ABC’s “Dancing With the Stars” premiered Monday, featuring a new lineup of celebrities, including former child star Candace Cameron Bure, from “Full House.” The actress made it clear that her wardrobe would be modest.What do you think of her stance on modesty?http://www.deseretnews.com/article/865599028/Full-House-star-Candace-Cameron-Bure-promotes-modesty-on-Dancing-Wi…

Did you see him on Ellen? San Jose’s 3-year-old “Cupcake Kid,” viral video star Mateo, and his mother, Linda, appeared on today’s episode of The Ellen DeGeneres Show… and Mateo finally got his cupcakes! Mateo’s mom got a big surprise, too. Full recap AND video here: http://bit.ly/NsfkTq

Show your support and LIKE and hope he does!!!

HERO: A Texas firefighter put his life on the line to save 9-month-old twins asleep in a back bedroom of burning home on Thursday. Please join us in honoring Randy Wood for his heroic actions. More: http://www.myfoxatlanta.com/story/25041921/plano-firefighter-savies-twin-babies-from-burning-home

Nicki Minaj has no problem showing off her goodies. Check out the latest “close up” body pics she put up: http://ow.ly/uMHx0 #booty #barbz

What are your favorite Shel Silverstein quotes or poems on aging?

HAHAHA #JustForLaughsLawyers should never ask a Georgia grandma a question if they aren’t prepared for the answer.In a trial, a Southern small-town prosecuting attorney called his first witness, a grandmotherly, elderly woman to the stand. He approached her and asked, ‘Mrs. Jones, do you know me?’ She responded, ‘Why, yes, I do know you, Mr. Williams. I’ve known you since you were a boy, an…

Seriously… isn’t this the cutest thing you’ve ever seen?

Saxo Bank is giving you the chance to win a luxury weekend experience at Le Tour de France finals in Paris. Open a trading account and place a trade through TradingFloor.com before June 14th 2014 and you will enter the competition.

And finally… ;)Thanks to ANTI-CAPITALISM

Celebrate your mum’s greatest achievements this Mother’s Day. Click here to buy the ‘I Turned Out Perfectly’ card >> http://bit.ly/1dat4yX

Everyone can find new friends at #Disney! Share this with YOUR best Disney friends!

Reunited with my one true love! @zozeebo ❤️

So true. Type “Amen” if God helps you stay focused on what really matters!

The Angry Bartender shared a picture 3/19/14