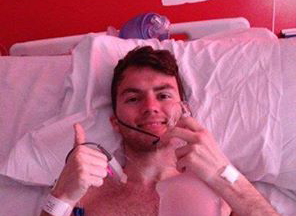 The topic of the week was this guy. He is a cancer patient who got popular when he started fundraising money for people who share his fate. The original goal was to raise £10,000, which after a while turned into £1million. Thanks to the support he was already able to collect more than £800,000 showing how supportive the Facebook community can be if they really stand behind something. A teenage cancer patient has raised nearly £800,000 after he posted a ‘final thumbs up’ to his followers on Facebook. Stephen Sutton, who was diagnosed with colorectal cancer in 2010, drew up a bucket list to raise cash for other sufferers when he found out his illness was terminal. He originally set out to raise £10,000, but later upped his target to £1million. Donations have been pouring i… Here’s something nearly as cruel. Just imagine this happening to you. Guess there are perks to being single. You really should worry if the food still vanishes, though. Second To None Nutrition shared a picture  4/27/14

Now one of the most hilarious posts we ever had in our english top posts. AS GOD AS MY WITNESS, HE IS BROKEN IN HALF!

This amateur wrestling video shows a lot of interesting moves, that could be interpreted as an attempt to dance. We aren’t sure what to think, after all there’s a WWE logo in the corner. That surely means that its approved content, right? Probably footage from the amateur leagues.

Next on the list: A list… for anyone who wants to clean up the house but seriously can’t be bothered to do so himself: Who thinks this is a good idea? Audrey

This list includes anything one could think of. You only need to come up with a reason to ground your child. But that shouldn’t be too much of a problem now should it?

How about doing it for something like this? After all a kid can’t even get close to being this adorable.

There is nothing like a guilty dog or cat that has been caught in the act. This kitty caught on film has one of the best expressions I’ve seen yet. Adorable. Enjoy.

Caught in The Act – Gotcha!facebook.com

Have fun with the top posts of week 17.

Second To None Nutrition shared a picture  4/27/14

When faced with senseless drama, spiteful criticisms and misguided opinions, walking away is the best way to stand up for yourself. To respond with anger is an endorsement of their attitude. ~ Dodinsky#quotes #positivity #inspirational

A teenage cancer patient has raised nearly £800,000 after he posted a ‘final thumbs up’ to his followers on Facebook. Stephen Sutton, who was diagnosed with colorectal cancer in 2010, drew up a bucket list to raise cash for other sufferers when he found out his illness was terminal. He originally set out to raise £10,000, but later upped his target to £1million. Donations have been pouring i…

How many of you agree?

Hey #vapefam, we’ve been including Yellow Berry (by Potion Vape) in sample packs and it seems like everyone has been crazy for this flavor…so Potion Vape has been generous enough to let one lucky person win a 120ml bottle! Here is the flavor profile:** Yellow Berry – a smooth, fresh raspberry and strawberry, with an added hint of lemon for that extra kick.Here are the rules:1. LIKE our…

The addict you are judging is someone’s son/daughter, brother/sister, husband/wife, father/mother… Don’t hate the addict… hate the disease!! PRAY FOR THEM!!! www.AddictsToday.com

Today is Punch a Blackhawk Fan in the Face Day!! Celebrate with a t-shirt!http://www.sunfrogshirts.com/Sports/Punch-a-Blackhawk-Fan.html?3269

WARNING FOR MOMS! “All of a sudden, I heard what sounded like a man’s voice but I was asleep so I wasn’t sure,” a Cincinnati mom said.She picked up her cell phone to check the camera in her 10-month-old daughter’s room. The camera was moving, but she wasn’t moving it.MORE INFO » http://bit.ly/QFgHk7

One Winner, One Contest, One Million Dollars.Are you an Expert Advisor (EA) trader? Enter our Free Forex Demo Contest for your chance to manage a $1,000,000 Fund and win $30,000 in your trading account.Enter here> http://www.commexfx.com/contests/one-winner-one-million/?utm_source=Facebook&utm_medium=Post&utm_campaign=AreYouTheOne

One million, one contest and one Winner | CommexFX Forex Contestscommexfx.com

One of my early calls for best dress at the #logies – The Project’s Carrie Bickmore.

These wings always remind us of the angels in our lives! So let’s take a moment together to cherish and remember…In honor of all special angels, we are giving away TWO beautiful pairs of today’s deal: HUGE Angel Wings! Two, you may ask?! Yes, one for you and another for a friend.Like our post and tag a friend in the comment section below, and you will be entered to win two pairs. Tag as man…

30 days hath September, April, June and November – you know the rest about others having 31…and we have 31 PAIRS of match tickets for this Sunday to GIVE AWAY!!!!To be in with a chance to win – please share and comment with who you think will score the first goal!Winners will be announced tomorrow by us commenting on the photo and normal Ts and Cs apply. Winners will be able to collect …

Each day 5 children die from child abuse. We have 1,411 pinwheels displayed outside of our medical center. They represent each child abuse visit we had in 2013. It’s time to do something! #ChildAbusePreventionMonth

Who wants a $500 voucher to shop with us online?

Who else would love to own a secret library?

Man, this is hard for us… imagine what it’s like for them…

We’re proud of you for raising bilingual and multilingual kids!!

Today, Ann Street Studio reinterprets our Bamboo Collection for Earth Day and we are in love with the images she created.

Tell us something we don’t know. 😉

On this important day we’d like to commemorate the ANZACs and acknowledge the many animals that not only fought by their sides, but also provided companionship and comfort in the darkest of times.

Congratulations to Jodie Foster and Alexandra Hedison, who married over the weekend! http://bit.ly/1ig0lKh

Feeling under the weather? You better hope not, because it’s going to cost you.The Abbott government’s latest misguided attempt to balance the budget will see ordinary Australians charged a “Sick Tax” – a $6 fee every time you visit your GP (on top of the Medicare levy we already contribute out of every pay). This is the first step down the path of a US-style healthcare system that preys on t…

In celebration of today’s Boston Marathon, we’re sharing the dramatic story of the first woman to officially run the historic race. Kathrine Switzer’s experience is a revealing illustration of the barriers that trailblazing women athletes had to overcome and of how far girls and women in sports have come in only a few decades. In 1967, Switzer was a 20-year-old college student at Syracuse Uni…

UKIP in first place on 31% for European Elections in YouGov poll today. Hit Like if you’ll be voting UKIP on May 22nd!

Our boats are only as tough as the men and women on board them.

The Wilderness Society shared a picture  4/25/14

Happy Arbor Day! Have you hugged a tree today?

TWS is Tasha’s 3rd home. At a young age at her first home, she was used for breeding. Living in a garage there for 9 years, one day she finally escaped through a hole in the roof. Her owner didn’t report her escape, fearful Tasha would be killed. But Tasha did finally return, scared and hungry. Then, Tasha went to her second home living in a 10×20 cage. Declawed by her first owner, she’s tende…

Jesus died for us, so we live for HIM.

Frank Medrano | Transformation TuesdayNEVER ,EVER GIVE UP! Arthur’s inspirational Transformation!! A must see story everyone should watch!www.thefrankmedrano.com

AS GOD AS MY WITNESS, HE IS BROKEN IN HALF!

My best wasn’t good enough for the win today, but I will be back http://t.co/YhTWE9SXwg

The best things come to those who…Never Give Up!more Ziglar Women

I will be turning 70 soon myself but I know there are many that much older. We keep proving that you’re never to old to have a good time!

A mom shared this photo of her son on Instagram, tagging it #downsyndrome. An Internet troll left one word on the photo: “Ugly.”You’ll love the mom’s response. Read it here >> http://kiro.tv/MeganResponds

Lynette, a mom whose blog typically chronicles her incredible adventures in cake making, posted a photo of what looks to be a chore chart. But instead of monetary incentives, the kids must earn 500 points to get “ungrounded.” Kinda genius. http://huff.to/1gVkHmB

HUMBLE HERO: Jose Tamayo was on an Easter outing to an East Bay waterfront park Sunday with his wife and children when he heard the cries of a young girl off shore. Without hesitation, he tossed off his shoes and dove into the water. He rescued the girl and then returned to pull out a little boy. Two children are alive this morning thanks to his brave act.Share and Like this story of a …

There is nothing like a guilty dog or cat that has been caught in the act. This kitty caught on film has one of the best expressions I’ve seen yet. Adorable. Enjoy.

Caught in The Act – Gotcha!facebook.com

No Wells, no Thompson, no Swallow, no worries – NORTH WINS for Drew Petrie in his 250th game!

Here’s a funny joke to kickstart your Monday morning!

That would do it!

Dogs Desperately Trying to be Friends with Cats

Dogs Annoying Cats With Their Friendshiptastefullyoffensive.com

Your daily dose of cuteness! #disney

Who thinks this is a good idea? Audrey