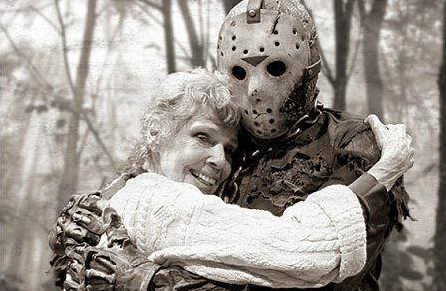 The focus of this week’s top posts was definitely on mother’s day. You could find a bit of everything. Comics, animals, soldiers and even horror movie characters. People definitely cared a lot about this international holiday. To all the red hot mama’s out there, a heartfelt thank you. A beautiful picture of a mother’s love. <3 This guy says it all! Happy Mother’s Day!

This weeks top posts also include a lot of really interesting and touching stories.

Take this one for example: A high school student who suffers from cancer was not allowed to attend his prom without wearing a mask. To make him feel less uncomfortable about the situation all of his friends wore one as well. Thumbs up for that! PROM MASK-QUERADE: A Virginia high school student and cancer patient wanted to go to his girlfriend’s prom, but his doctor said he would have to wear a mask to protect himself from getting sick. What his friends did to make him feel comfortable will no doubt warm your heart: http://bit.ly/SDbSZG

Or the story of a pair of “mono mono twins” that ended up holding hands when they were born. Bob Jones is working on a story regarding twins that were born today. The twins are called “mono mono twins” because they were born with a rare condition in which the babies share an amniotic sac. When they were born at Akron General Hospital today, they came out holding hands (as seen in the photo below). VIDEOS, PHOTOS: http://5.wews.com/wGzeb

“Mono mono twins” are siblings who share an amniotic sack. This is something that rarely happens and was another reason why this birth was considered so special. Something we personally didn’t know before is that there are a lot of different ways a pair of twins can develop inside their mothers womb. Here a small picture to show all possibilities. 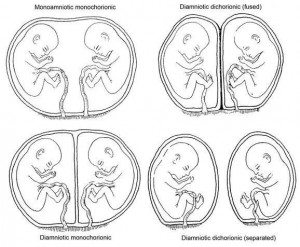 Fortunately babies aren’t the only creatures who look cute when holding hands. These two cats show us that they can easily compete.

How cute is this…

While we are talking about illusions (because in that video it surely looked like one of them was playing with a mirror in the beginning). Why not bring it to another level with a painting such as this one? This is definitely gonna make a lot of people stop. We had to look twice to notice that it isn’t real.

On the other hand here’s a post that is pretty easy to expose as a fake, but encountering them in a local wood would definitely make people stare for quite a while as well. We guess this crossbreed would make a decent pet. After all, cats have the habit to wake you up at night anyway. So fusing them with an animal that is active at night surely wouldn’t make them more annoying.

At least no one would have to rescue them from trees anymore.

Have fun with the top posts of week 19.

PROM MASK-QUERADE: A Virginia high school student and cancer patient wanted to go to his girlfriend’s prom, but his doctor said he would have to wear a mask to protect himself from getting sick. What his friends did to make him feel comfortable will no doubt warm your heart: http://bit.ly/SDbSZG

Wow – this #book bed is amazing! How would you like to have it in your bedroom? Image from SecretSafeBooks.com.

This guy says it all! Happy Mother’s Day!

“Kids need time to be bored; That is how creativity is born.” -Melanie Jean Juneau

University of Roehampton shared a picture  5/9/14

If you’re as outraged as we are that over 200 Nigerian schoolgirls are still missing, take action and demand their immediate release. Take action now: http://amn.st/1spiwz8Already emailed? Please ask your friends to add their voices.#BringBackOurGirls

The most treasured possession you can give someone is your TIME. Amen?

Here’s something you don’t see every day!Ron Terry:”The odds of seeing an albino moose are astronomical near Mine Center, Ontario, is even greater than astronomical. To see two of them together is nearly impossible. We wanted to share these photos with as many people as possible because you will probably never have a chance to see this rare sight again. This is a really special treat, so enj…

Know a nurse? Share this post! On May 12th, we’re celebrating Nurse’s Appreciation Week with a free tea of the day for all nurses and nursing students.

Mother’s Day is on Sunday and Mumm’s the word! Visit the “A Toast to Spring & Mother’s Day” tab on our Facebook page to enter your name and email address to receive $2 off your next bottle of Mumm Napa – because every Mom deserves some bubbles!

GREAT STORY – A few weeks ago, a 13-year-old called the police. The teenager told police he didn’t want to live with his family anymore.The responding officer went above and beyond his call of duty for the teenager. Read what he did >> http://bit.ly/1uHwTRr

Second To None Nutrition shared a picture  5/9/14

Give-a-way Time~ Please “like” this picture and then comment on it to be entered to win a 3 pack of minky pads any size/any absorbency/any in-stock set! Just for fun make your comment “deal” or “no deal” to the question “Did Tree Hugger Cloth Pads get a deal on Dragon’s Den?” We can’t tell you what happened but I love to hear the guesses.Want an extra entry? Tag a friend for an additiona…

Happy Mother’s Day to all of the hard working Moms out there!

NBC almost gave The Walking Dead pilot the green light. Except they wanted one MAJOR and baffling change.

NBC Executive Wins Most Baffling Note Ever After The Change He Suggested To The ‘The…uproxx.com

God can be found in all sorts of places.

✰ ✰ ✰ ✰ ✰ COMPETITION TIME ✰ ✰ ✰ ✰ ✰We have recently announced the arrival of our NEW TECC go e-cig kit, which was designed and reinvented exclusively for The Electronic Cigarette Company, to meet the demands of today’s convenience driven e-cigarette users, the go e-cig sets a whole new datum for cartomizer kit e-cigarettes.To be one of the first to win one of these fantastic new kits, simp…

Today we celebrate our amazing heroes at home…the ultimate supporters that stand behind those who serve. We’d love to hear about your hero. “Like” & “Share” to send your love and support.

“But at least you have a healthy baby!!!” [Please read this text before commenting!]It’s no wonder that so many new mothers struggle, often in silence, while others tell us that we should be grateful that our baby is healthy. Do these people know the the leading cause of death amongst new mothers in Australia is suicide (with some other countries following similar trends)? Mothers MATTER. It …

When Vera Robinson (MBE) started fundraising for Redcar lifeboat station in 1930, the lifeboat was oar-powered. Today is Vera’s 100th birthday & she’s still raising money for us – So join us in wishing this special lady a very Happy Birthday! http://bit.ly/1nitXbX

Breaking news out of Minnesota! The Senate, by a vote of 48-18 just passed an effective medical marijuana bill! Please share this news with anyone you know from Minnesota!

Navy Lt. Kyle Bandermann & Lance Buchanan, members of the The American Military Partner Association, got engaged in this sweet proposal! Share to congratulate the happy couple, and check out the story of the big day: http://bzfd.it/1mC6OSq

God can use anyone. Be encouraged by that today.

Trust Jesus even when you don’t understand.

Denmark goes green on energy – all the way! http://bit.ly/1mwQ0fQ

Too cute not to share, a beautiful photograph of a littlefox cub on our sanctuary.

There is no better relationship!

I was running today and I said, “good afternoon” to this lady. She was out on the trail walking. She said, “not bad for 79.” So, I decided to stop and talk to her. She had no idea who I was, but she was so sweet. She said, “Young man, I’ve been through a lot. Lots of people give up, but trust in The Lord. He won’t let you down.” I told her I do trust Him. Then I told her my name, not expecting …

I appreciate that this might be TMI, but I couldn’t help myself. Just admit it… If you have kids you’ve been here.

You are NOT an accident!———————————————–Join The Live Across America campaign -http://bit.ly/LiveAcrossAmerica and choose from these exclusive gifts: – Free song of the month – The new album – Videos – V.I.P. Concert Tickets – Phone Call From Me

Bob Jones is working on a story regarding twins that were born today. The twins are called “mono mono twins” because they were born with a rare condition in which the babies share an amniotic sac. When they were born at Akron General Hospital today, they came out holding hands (as seen in the photo below). VIDEOS, PHOTOS: http://5.wews.com/wGzeb

Wow! America’s oldest Veteran, Richard Overton age 107! Congratulations and thank you for your service! Show this man some respect!

“GOODBYE MAMA” A college student in the path of a deadly tornado sends a heartbreaking final text message to his mother. Jeffrey Hunter was killed last week when a tornado swept through Arkansas. Read why Jeffrey’s mom says it was the “most precious thing a son could do.” http://bit.ly/1mwhTV3

LeBron James admitted today that he believes Kevin Durant deserves to win the NBA’s MVP award, telling reporters: “Much respect to him and he deserves it. He had a big-time MVP season.” http://thesco.re/1ijchp5Is LeBron right?

See, even Beyoncé does it.

In honor of Mother’s Day this weekend.’LIKE’ and ‘SHARE’ to thank your Mama for all she does for you ♥

13-year-old Cameron Simmons called police after fighting with his mom… and the call changed his life. Officer Accerra noticed Cameron not only didn’t have a bed, but he had very few belongings. Officer Accerra returned with a bed, TV, desk, chair and a Wii game system. STORY: http://2wsb.tv/1uHXE8eThe officer also gave Cameron his phone number and told him to call directly anytime.

Picture of the Week! Here is a little humor to brighten your day. This should be the only hard part about #interracialdating! #interracialcouple

Congrats to Matt Fraser on his GW goal in OT for the Boston Bruins tonight! Lets see some “likes” for the former P-Bruin! #LetsGoBruins #PBruinsPride

How cute is this…

How many likes for this stunning pup? 🙂 #CanineCuteness

Discover the Forest shared a picture  5/9/14

you may know me as boo; buddy knows me simply as creeper.

“‘Community’ Won”: Mourning the Death of TV’s Most Improbable Showblogs.indiewire.com

A beautiful picture of a mother’s love. <3

While Kanye West was walking home with Kim Kardashian in New York City, a young rapper approached him and started rapping. Watch how Kanye reacted:http://pnps.co/1hsdV84

Exploring a bit of Brighton today!

To all the red hot mama’s out there, a heartfelt thank you.