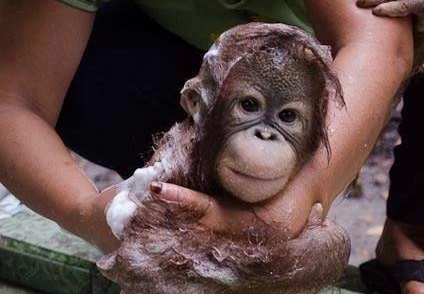 We made a slight change to our weekly top posts and it’s kind of the beginning of a new era. From now on we try to filter as many raffles as possible, so you will see less of them and enjoy more truly funny, witty and heart warming content.

This week’s top posts are all about small creatures. Be that humans, animals or robots, it doesn’t matter. You’re tiny? Then you were most likely a hit. Let’s get started with an interesting fact regarding the health of your children: Playing outside makes them healthier. Could someone use a timeout… side?

Well we guess it’s a given fact that smartphones exist nowadays and that they are a beloved toy. Imagine children would still have to use technology we grew up with – unthinkable. Gotta say though, that phone had a lot of charisma. Looking at the next post we are facing a dilemma. What is more important? For your teeth to be healthy or for them to be fancy? Animals don’t have to worry about tough decision like that. This post of an infant orangutan was the most successful of the last seven days, generating more than six times the amount of reactions than the page has fans, skyrocketing the talking about value to 450,000 within 24 hours. That’s especially impressive considering the average amount of reactions the page received in the last months was around 437 per post. What does that teach us? Post more baby monkeys. Or a koala? Adorable, aren’t they? It’s a girl! As part of our Endangered Species Awareness week, we’re asking you to help us name Rose’s little Koala joey for your chance to WIN a Featherdale Gold Sponsorship pack. The prize includes entry to Featherdale for a family with an up close private encounter with a Koala, sponsorship certificate and fact sheet on our Koalas. * To win, post your name idea below, like our page and m…

But apparently little creatures don’t even need to be real to be loved by everyone. R2D2 hit it big, even though his attitude being rather “mature” in this post. But does that matter? He’s still cute to look at no matter what he does. Have fun with the top posts of week 20.

The budget cuts for #musiceducation must end!

Officials say Cara Cox was reported missing four years ago by her mother in Deltona. This week, the National Center for Missing and Exploited Children got a tip that she was spotted in Mexico. Now, 12-year-old Cara has been reunited with her mother. READ MORE: http://bit.ly/1gC1BYz

Who remembers watching this as a kid?

Pretty cool! Did you know this about cats?

Firefighters take a break after tackling the San Diego wildfires.Thank You For Your Hard Work!Like to Show Your Support!

Dan – @realbriandailey posted this photo following tonight’s Game 7 win by the Habs. #StopTheIgnoranceIf you remember, he posted a pic addressing the ignorant and hateful Twitter comments made about P.K. Subban after his game winning goal in Game 1. http://on.fb.me/1osEh1q

“Fine, it was me. At least I can admit it.” #DogThoughts

We are re-drawing the machine that was not claimed! Winner gets a choice of Silhouette CAMEO or Sizzix eclips2 with software and $20 SVGCuts.com gift card!!Simply “like” and “share” this post for your chance to win!We’ll announce the winner tomorrow!New to SVGCuts? Learn more about us here: http://svgcuts.com/blog/about/

Loc lovin red locks… Do you colour your loc?

From the farmyard: Breakfast or art?

Beach goers at a popular SC beach were shocked twice in one day when a big critter washed up out of the ocean…then watched someone shoot it at point blank range.DETAILS and PICS: http://bit.ly/1svH7jX

Cat candle with a skeleton

Shouldn’t this be a requirement in order to breath?

#teamjake you guys got him to the finale!! Way to go Musicbyjakeworthington!!! LP is so proud!

It’s a girl! As part of our Endangered Species Awareness week, we’re asking you to help us name Rose’s little Koala joey for your chance to WIN a Featherdale Gold Sponsorship pack. The prize includes entry to Featherdale for a family with an up close private encounter with a Koala, sponsorship certificate and fact sheet on our Koalas. * To win, post your name idea below, like our page and m…

Sentenced to death for ‘apostasy’ because she wouldn’t renounce her faith. Sentenced to 100 lashes for ‘adultery’ for marrying her Christian husband.Stand up for Meriam Yehya Ibrahim. Take action now: http://amn.st/1mATaws

We’re deeply saddened to hear that Stephen Sutton has passed away. We know that he’s been a true inspiration to so many people and he’s raised an incredible amount of funds to help others affected by cancer. Our thoughts are with his friends and family at this difficult time.

Here you go guys, a viral image for you to easily spread the message.This is a scandal and the anti-English authorities are to blame! Share, share and share again.

Right now, same-sex couples like Stephen and Eddie are in line to apply for a marriage license in Little Rock, Arkansas! Click “like” to congratulate all of the couples who will get married today in the South, and read their stories: http://bit.ly/1g5zbQR

“I make this pledge to Australian pensioners. We will not surrender the security of your retirement. We will fight for a fair pension.” SHARE if you agree.

“Fear not, for I am with you;Be not dismayed, for I am your God.I will strengthen you,Yes, I will help you,I will uphold you with My righteous right hand.’Isaiah 41:10”

Make sure you don’t lose the moon while counting the stars.

I just had to post this pic! Isn’t she adorable?!

This is from Carino Bistro here in Calgary. 5 bucks off for having decent kids!!! I like it. Thoughts? Marc

Because raising a tiny human being is one of the hardest jobs out there: http://bzfd.it/1gbQaXo

Thunder F Kevin Durant couldn’t watch Russell Westbrook take his free throws in the final seconds of the game vs. the Clippers. http://thesco.re/1jfElzzIs this the best photo of the playoffs to date?

Would you?I would, in a heartbeat.

The word “duh” comes to mind…

Richmond is mourning the passing of the greatest coach in its history, Tommy Hafey. The four-time Tigers’ premiership coach died today after losing his battle with cancer. RIP Tommy.

It’s a grand old flag and it will be flying high tonight! Sing it loud and proud, this one’s for you!

Could someone use a timeout… side?

Quote of the day

Last night’s Game of Thrones built to an EPIC climax. Here’s why “The Laws of Gods and Men” is an entire season in one episode: http://goo.gl/VOd1qU