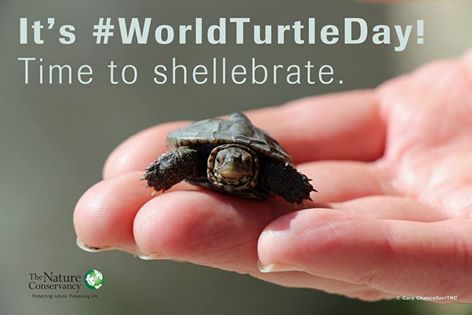 While Europe was head over heels about the upcoming european elections, English speaking pages weren’t interested in the topic all that much. A bit surprising, considering the fact that the UK was one of the voting countries. We could only spot one post that had to do with it. Most english pages had more important things to take care of, for example reminding people that it was world turtle day. The Nature Conservancy shared a picture  5/23/14

Hell yes, world turtle day, something that Rafael, Leonardo, Donatello and Micheangelo definitely will appreciate. One share probably equals one human life saved saved by the Turtles in the new movie. That would explain why people spread the news to excessively. Justice dwells in the shadows. #TMNTMovie

Also, the King of Pop  seems to be back, or at least that’s what the top posts might make you think. Michael Jackson received multiple mentions this week. Not only was he, or rather a hologram of himself, performing at the Billboard Music Awards… …but there was also a tiny reincarnation of him dancing at a high school competition, performing himself into the hearts of a lot of people. With 90,000 shares this kid really hit it big last week. Unfortunately for us, the video is blocked due to copyright infringement. But after a bit of trying we managed to watch it anyway and can only encourage you to do so as well. It’s quite impressive. This kid CRUSHES the competition at a high school talent show…with his rendition of Michael Jackson’s ‘Billie Jean’!CLICK HERE and enjoy: http://link.fox8.com/1k5OBdb

We also have a recently invented sport to show you: Prius hunting. The most important thing? Being very, very quiet. You have to lay low for a while before approaching the Prius but as soon as you caught him out of position it should be easy.  We would recommend a battery as bait. Lmao ltusa! This ones good! -robb

Speaking of wild animals. Here, have a mother with her kittens. Brad sent this one to me. #CopyCat

A mother who apparently ran out of toner to color them. Have you tried tech support? Turned it off and on again?

Have fun with the top posts of week 21.

Discover The Dinosaurs shared a picture  5/22/14

#dinogenius What are the names of these two Dino’s from this classic film?

Taste-buds, prepare to enter the ring of #JackFire

When you were young, you watched Baywatch followed by Gladiators then Blind Date on a Saturday night.

Does this look familiar? 🙂

You and me both Jimmy.

She Thought She Was Doing a Pregnancy Photo Shoot When..http://bit.ly/AbsolutelyJustBeautiful

It’s a beautiful day- I think I’ll skip my meds & stir things up a bit.

Here are 3 fabulous (& delicious) ways to enjoy Trop50 Raspberry Acai on #GirlsNightIn.Which one are you going to try?

Lmao ltusa! This ones good! -robb

“Hi, I’m Spud. Pull up a chair and tell me all your troubles!”Spud | Arctic Breed Rescue

Congratulations, Meryl and Maks, on your Mirror Ball Trophy!!!

Living the Lahaina Dream on Maui: How Kevin and Linda Brooks found their slice of paradise http://ow.ly/x0C7i

WIN ME : If you would like to win this beautiful finance boost stone: Simply write your name below and I will pick one name I feel drawn to later today 🙂

Justice dwells in the shadows. #TMNTMovie

In February 2003, Cottonelle introduced a cuddly new puppy playmate as the icon for the brand. #tbt #2000s

One of these things is not like the others…#RMEF

Cody the Lab has incredible puppy eyes! He is so cute 🙂 http://bit.ly/PTLabrador

One year on today from his tragic death we remember Lee Rigby.

Brian May is preparing to spend £7m to buy one of Britain’s most prestigious shooting estates — so he can close it down.The Chargot estate in Somerset, where last year paying guests shot up to 40,000 pheasants and partridges and 40 deer. He intends to stop the shoots and transform the estate into a sanctuary for wildlife including badgers and deer.

When you are facing crisis, remember how many times God has come through for you. God is faithful and HE is coming again with power and great glory! – John Hagee Ministries

Top of the Monday morning to you!

Share this graphic to congratulate Pennsylvania on this landmark step forward! http://bit.ly/1gLAiLy

The Nature Conservancy shared a picture  5/23/14

Before the election, Tony Abbott said “no cuts to education.” Now students will will pay higher uni fees. SHARE and say it’s unfair.

The Eagle has Landed! First copy, hot off the press.

Great news! Just got word Bath Crashers has been picked up for an 11th season! Without you guys watching – this doesn’t happen. Thanks for keeping my crew & I working!!

Brad sent this one to me. #CopyCat

I think I said most of these today!

Big news, #Bulls fans. Taj Gibson will start next season . . . and Carlos Boozer looks to be out. All the details: http://sun-tim.es/1kbJkkt

This kid CRUSHES the competition at a high school talent show…with his rendition of Michael Jackson’s ‘Billie Jean’!CLICK HERE and enjoy: http://link.fox8.com/1k5OBdb

Happy Birthday to the legendary Seabiscuit, born May 23, 1933.

Caravan and Motorhome On Tour shared a picture  5/20/14

They’re pallbearers for a 5-year-old boy who died of cancer. http://nydn.us/1sLlLiG

Jim Kelly is DONE with chemotherapy! As he finishes his last four rounds of radiation, keep up your #PrayersforJK. http://goo.gl/Ger1aV

If this doesn’t make SportsCenter Top 10, there’s something wrong…#DigDeep

Quote of the day

#CaliforniaChrome has a message for his fans rooting for him in the #Belmont:#TripleChromehttp://www.horseracingnation.com/horse/California_Chrome

How CUTE are the Beckhams? David and his sons enjoy father-son time at hockey game…http://www.hellomagazine.com/celebrities/2014052518972/david-beckham-sons-hockey-game/

A great thought to keep in mind.

If This Is The Future Of Our Roads, That Would Be Awesome

Saturday mornings were off the hook! As soon as Fat Albert said: “Hey, hey, hey! It’s Faaaaat Albert…and I’m gonna sing a song for you” I knew it was ON! Man I miss those days…LOL.