This week we gathered some of the biggest and most well know software brands and analyzed their success on social media networks. How do they market their products? Do they still use pictures even though they sell products that are made of bits and bytes? Well, prepare for a few surprises.

Almost every software developer can be found on Facebook. That’s probably why we were rather surprised to see brands like Skype, Chrome and Firefox lead the list of the pages with the most fans. Windows comes in 4th, Gameloft, Mediafire and the third browser in the top 10, Opera. Lots of fans, lots of opportunities, but do the companies use them to improve their global standing? As usual: it depends.

While Skype publishes 6,1 posts on a daily basis, you will have a hard time finding some of the bigger and more known brands do so as well. The top group is clustered with rather (at least here in Germany) unknown companies like Mobogenie, UC Browser and Wooga. What’s really interesting to see, is that Google Maps actively tries to increase its community on Facebook, something neither Gmail nor Chrome put a lot of effort into. Yes, Chrome might have the second most fans, but they are far from doing anything for it. 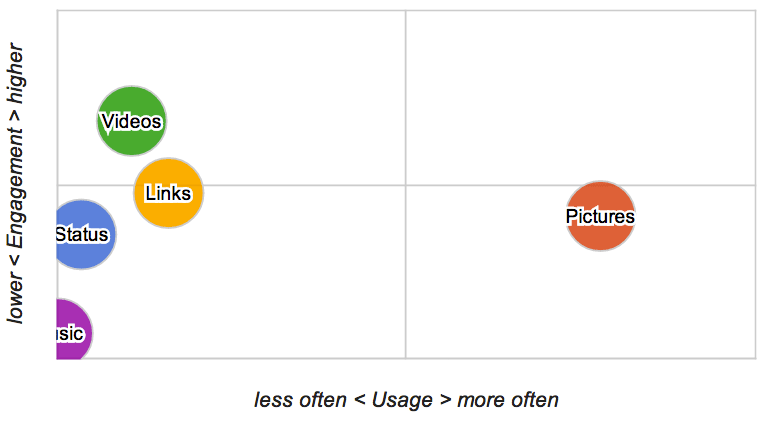 Overall the sites try to publish as many pictures as possible. A problem with that: They aren’t even popular. Videos are way more successful and even links manage to overcome to their popularity. Considering all of this the two post types are heavily underused. Pages should focus more on analyzing behavior of fans and not just post something for the sake of it.

As you can see: There’s a lot of content that is published at times at which people simply aren’t interested in it, or generally do not browse Facebook. Over all it can be said that if you want to post on the weekend, which is a pretty good attitude considering how many companies basically refuse to do so, please do it either in the morning or the beginning of the night. People seem to be way too busy on the weekend to react to content, meaning that it’s wasted effort.

The service level isn’t really good either. Approximately 85% of the pages have wall posts disabled. The ones that actually offer support to their fans do a pretty mediocre job as well. Only 29 % of the posts receive a response, 6,3h they have to wait on average. But considering the fact that most companies offer pretty decent support on other social media platforms this is somewhat neglectable.

Conversations are a good way to establish a community

Twitter turns out to be as popular among companies as Facebook. Many Tweets, lots of different content and a lot of attempts to have conversations with their customers. The best job does Blizzard Entertainment. The game developers posts 67 times per day, 94% of the tweets are involved in conversations. It could be considered their central support hub.

But beware, Windows almost got you. They publish 66 posts per day, 99% of them being conversations. This applies for most companies though. Be it Skype, Windows Phone, Office or Rosetta Stone. Talk to your customers like they do, it will help. Interesting to see that especially Google almost refuses to engage their followers on Twitter. Chrome and Mail post less than once a day.

The engagement is pretty lackluster. But due to the fact that support is the main objective of the accounts it is understandable. Nonetheless should companies put a little more effort into the posts that aren’t related to conversations. When you only publish ~1 tweet per week you should make sure that this one is worth the users time.

Videos are an important part of brand building

Youtube on the other hand involves a lot of dedication and the companies heavily invest in it. The average amount of published videos per day might only be 0.3, but there are quite a few who double that value. Video game publishers like Ubisoft even post 2 within 24 hours. Also interesting: Antivirus software companies, such as Kaspersky, avast and AVG, publish a lot of really successful videos.

But what is the content about? It’s pretty obvious for game developers, right? But what do other companies do to draw in customers?

Skype goes for a rather personal approach. A lot of their videos have to do with their employees. They show offices from all over the world and try to give you an impression of the working climate. Companies such as AutodeskEd and Adobe on the other hand try to show you how to properly use their products by publishing tutorials while Kapersky for example helps their fans by giving them more insights regarding online attacks so they have an easier time with understanding why and how cyber attacks happen.

Many companies try to do their best, and end up pretty successful. There are some exceptions though. Some brands that don’t even try for reasons we can’t tell. Pages need to stop to look at social media engagement as something that do because they have to and start to see the opportunities. Simple optimazation can help to double the success. This doesn’t even require a lot of effort, which makes it even weirder that there are so many who simply don’t seem care.