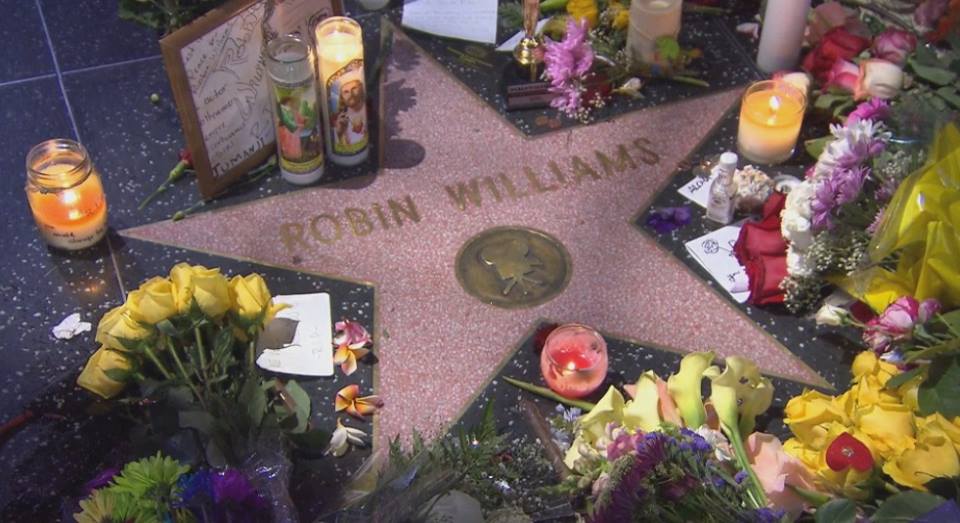 The Top Post have a rather sad note this week. The death of Robin Williams and Lauren Bacalls shocked many people, and if such feelings are easy to make out anywhere then it’s on Social Media platforms. Twenty-five contributions ended up being successful, overshadowing anything else that happened in the last 7 days. It is with great sadness that we say good bye to the talent of the one and only Robin Williams. There will never be another like him. Robin Williams’ star on the Hollywood Walk of Fame this morning.

But how do you actually share your condolences on Facebook? It’s obvious that a thumbs-up doesn’t stand for “liking” the news, but rather for the fact that a person shares your feeling.

Is it even appropriate to share these sort of feelings on Facebook? Well, doing so in person is obviously favorable. Still, expressing them via Social Media shows your compassion pretty well and might sometimes be better because it’s less stressful for the bereaved.

A few simple rules are:

Here are Top Posts of week 33.

Detrn and Ethan arrived 7 weeks early and had many health challenges as a result. With the great care at Baptist Memorial Health Care, they were able to come home after 4 weeks. Words of Hope: Think only positive thoughts and leave the negative ones behind. God can fix anything!

Her smile? The way her ears perk up? What inspires #TreatTime with you and your four legged friend?

Here are some reasons you should adopt a black cat!- Their fur won’t show on your little black dress- Carrying a black cat around will make you look slimmer- You can tell your friends and family that you adopted a mini-panther- Black cats are stylish because they go with everything- They need the most help finding loving homes and will be FURever grateful for your love!thank you so much …

Robin Williams was just in Minnesota, a Hazelden, to focus on continued sobriety, his publicist said. The Dairy Queen in Lindstrom posted this photo of him on its Facebook page June 29. His obit: http://ow.ly/AdsEs

This photo of last night’s moonrise over Fort Worth is way too cool not to share with all of you. Thanks to Brian Luenser letting us share his amazing photo!

It is with great sadness that we say good bye to the talent of the one and only Robin Williams. There will never be another like him.

This time last week, a group of Stirling Station superheroes made headlines all over the world. ‘Train man Andy’ has been identified, but we want to recognise those who helped him! Tag yourself or someone you know who was there, and we’ll give them the recognition they deserve.

Fanny’s back and has been doing some “research”. Uh oh.

Happy Tuesday #vapecommunity, who is ready for the BIGGEST JUICE GIVEAWAY WE’VE EVER DONE!?We have teamed up with The Mitsu to give away over 1 GALLON of their e-liquid! This giveaway is joint with our Instagram and each person can join on both FB & IG. There will be a TOTAL of 10 WINNERS (5 on Facebook & 5 on Instagram), EACH will receive 480mL (120ml of each flavor:* Ichigo – a delicious…

MISSING CHILD ALERT: The Florida Department of Law Enforcement has issued a statewide alert for a 9-year-old boy last seen early Wednesday morning in his home on Duval Street in Live Oak.PLEASE SPREAD THE WORD so we can bring this boy home to his family! –> http://bit.ly/1mJB1d4

18 SCARY-CUTE DIY MONSTER DOORShttp://www.goodtoknow.co.uk/family/galleries/35015/monster-doorsHalloween may be in the distant future, but this was too cute to share

This picture of Robin Williams was taken less than two months ago when the actor showed up at a Lindstrom, Minnesota Dairy Queen. At the time, his rep said he was spending a few weeks at the Hazelden Addiction Treatment Center.

RIP Robin Williams. Thanks for the laughs. ♥ #robinwilliams #gonetoosoon

This may be the best Ice Bucket Challenge ever!The video starts just like the rest with a girl saying she’s about to dump a bucket of ice water on her head to raise awareness for ALS.WATCH to see why her father’s challenge is the one you will not forget: http://go.fox43.com/1oOrsOT

Robin Williams’ star on the Hollywood Walk of Fame this morning.

Congratulations, Jade Perez, on walking to your first day of school!”This is a day we thought would never happen,” her mom said. LIKE to wish her luck at school! SHARE your own 1st day photos: http://on.11alive.com/1nvjrJd

Happy Birthday Jorge Posada! To celebrate, let’s take a look back when Posada became the first Yankee since Bill Dickey to hit grand slams in back-to-back games in 2010. Watch it here: http://yesnet.me/JorgeGS

A convicted child molester is suing the county after he was raped multiple times in the Garfield County Jail. He says he now suffers from nightmares and anxiety. — http://bit.ly/1qarSLG

Last month, we shared the story of the unlikely friendship between Erling Kindem, 89, and Emmett Rychner, 3, of Farmington.Today, the neighbors said goodbye to each other with Erling giving Emmett a silver dollar and a note that said, “may we be friends forever.” http://kare11.tv/1uIvclt

Please dont feel you have to share this, I know it says share on it, but it just caught my eye today, so just wanted to share with you, it’s so very true we dont always see the struggles on the outside people have to deal with each and every day X

IGNORE NO MORE: A mom became fed up with her kids ignoring her calls, so she developed an app that put an end to it. The app locks her kids’ phones until her call is returned.Forward to other parents you know –> http://bit.ly/1mQCFJW

“If it isn’t God’s backyard, then he certainly lives nearby.” – Robin Williams on Glacier National Park. RIPPhoto: Kim Hang Dessoliers

Today the world lost an iconic man and entertainer, and St. Jude Children’s Research Hospital lost an incredible friend and supporter. We send our deepest sympathies to the family and loved ones of Robin Williams. Mr. Williams generously gave his time to raise awareness and funds for St. Jude and for our patients battling childhood cancer. His humor brought bright smiles and laughter to our pat…

He has brought us too far to leave us now! #COGIC

Aaron Hill is a disabled boy in Okeechobee who was lured out of his home by a girl claiming to want to go on a date. Once to the location she chose, he was ambushed by Andrew Wheeler and a gang of at least 8 other people. Andrew beat him senseless, held a knife to his throat, And told him he was going to shoot and kill him. This was filmed the whole time, but currently this is the only video I …

Praise God for such an amazing response tonight at #HarvestSoCal. So many lives changed! Welcome to the family of God!

Iranian mathematician Maryam Mirzakhani has become the first woman to ever win the Fields Medal — known as the “Nobel Prize of mathematics” — since the award was established in 1936. The Stanford mathematics professor was awarded the prestigious honor for her contributions to the fields of geometry and dynamical systems. In Quanta Magazine, Mirzakhani describes how she decided from a young …

When something is ‘out of control’ it is merely out of your control – not God’s!

Drew Holcomb and the Neighbors shared a status  8/12/14

Dear Robin Williams. As of today, I will never get to tell you Thank You. It was on my bucket list, but it will have to be in another lifetime, in another place. I wanted to thank you for Dead Poet’s Society, because it helped me make sense of life and death and relationships in my teenage years, and helped me find a way forward in the wake of my brothers death when I was 17. I understood “Ca…

At 6am this morning, Edith Flagg, my grandmother, passed away. As most of you know, she accomplished so much and shaped me into who I am today. She was my best friend, and my hero. I love you, grandma, and some day, I will see you again.

Can you discover what’s wrong with this photo? The actual Downton Abbey season 5 promo photo

Robin Williams is gone. Yet another whose gregarious social face did not reflect his inner world. We lose so many people everyday to unresolved pain that overwhelms their consciousness. Few are well-known. Most live anonymous lives. We must prioritize authentic revealing and emotional release in our world. We must slow down to see each other deeply and to share our inner worlds so that no one f…

Returned from vacation to an empty desk beside me. All that’s left are some business cards. I’m just going to pretend my co-anchor is on an extended vacation. #missingJohnBachman #wsbtv

Skit for Sundays episode of #askwolf

RIP Robin Williams. I got the chance to meet him and we was the most humble, funniest, and nicest person I have ever met. You will be missed.

INTRODUCING THE ROTORDRONE – Facebook Edition!It’s perfectly clear – rotordrones and multirotor craft are here to stay. Turn on the TV and in no time you’ll see news mentions discussing the pros and cons of this still-evolving technology. Click this link to get access to the latest Facebook Edition of RotorDronehttps://www.facebook.com/RotorDrone/app_116500211743808

“To those he touched who are sending kind words, know that one of his favorite things in the world was to make you all laugh. As for those who are sending negativity, know that some small, giggling part of him is sending a flock of pigeons to your house to poop on your car. Right after you’ve had it washed. After all, he loved to laugh too.”

We mourn the loss of our friend Robin Williams, who always made us laugh and smile.

Even Martin Garrix is tired of Animals

Martin Garrix Reveals He Has Side Projects, Admits He’s Tired of “Animals”youredm.com

Neymar Jr. is back on the pitch with FC Barcelona.

Finally! A premiere date for American Horror Story: Freak Show has been revealed!

We will miss you Robin…

Share your prayers below for Robin Williams. May he rest in peace.

You won’t believe the amazing response Ariana Grande wrote to a homophobic comment about her brother Frankie Grande.Let’s just say somebody now has one more big problem named Ariana…

Ariana Grande Stands Up For Her Gay Brother Onlineus.beamly.com

A Virtual Visit – Experience Wakatobi Like Never Before http://buff.ly/1pcBLfj

Doing what he did best… RIP Robin Williams.

We did it, we held them off, 7 in a row, Come on you Tigers!!!!Watch the boys belt out the song http://tige.rs/1sLqgyk

To our Indian fans around the globe, have a great Independence Day. Have you seen our Indian fun clip we put together? #india #independenceday #skydivingfun

Nothing in life is easy#StayPrayedUp

Is Marvel Studios ready to move forward with #TheInhumans? Check out the rumor here: http://bit.ly/1l0wUi0

Trust that HIS plan is the better plan.

Happy 24th birthday, Jennifer Lawrence! See what the stars have in store for the Oscar-winner, and for you… #HappyBirthdayJenniferLawrence

“Is lunchtime yet Mommy?”

Try to remain calm…An Aphex Twin blimp is flying over London today with “2014” emblazoned on it:http://www.factmag.com/2014/08/16/an-aphex-twin-blimp-is-flying-over-london/