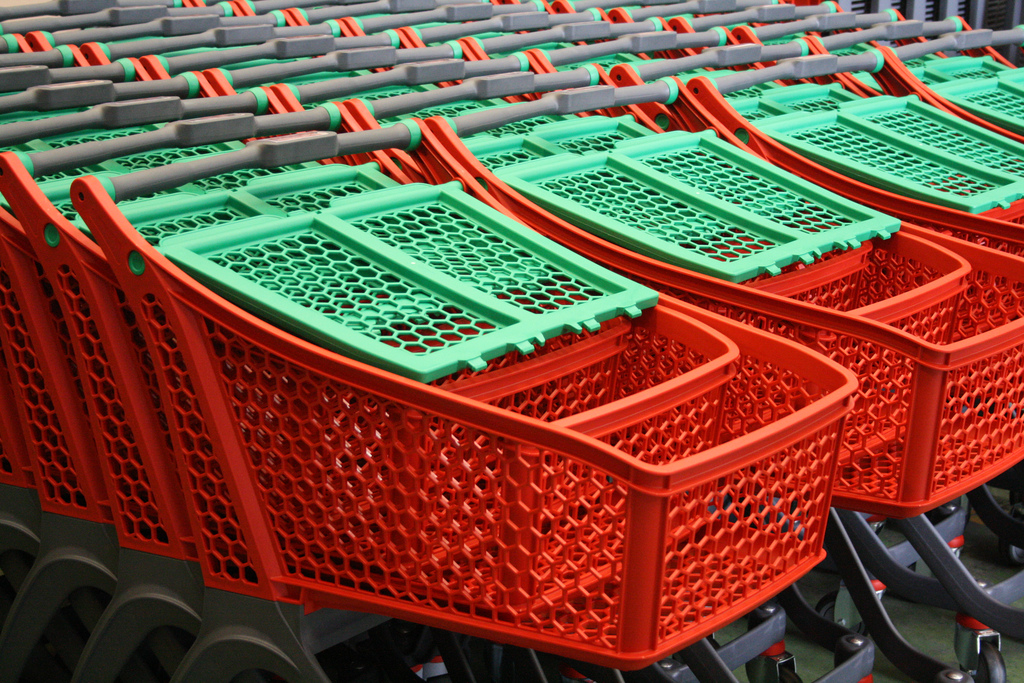 American supermarket chains are some of the biggest in the world. They provide food, clothes and other useful goods. Goods that people need on a daily basis. But do they also provide entertainment outside of their stores? Do they answer customer questions as quickly as possible? And how do they approach troublesome situations? This weeks rankings most important topics: groceries and gun laws!

A shit storm caused by guns

The Service level is rather bad. 60% of all user posts receive a response within 16h. A pretty long time if you think about it. Answering a simple product related question should not take more than a couple minutes. Anything between 3-6 hours is still acceptable, but letting customers wait for two thirds of a day isn’t.

Small chains have to deal with almost no support requests. Hiller’s Markets for example reacts to 100% of all posts and does so in 0.1h on average. The thing is that the page only has to respond to 0.1 posts per day. Which means that in the last months there has been maximum of 2-3 user posts. That’s something a small company can’t do anything about though. If there aren’t any questions you can’t respond to them. The fact that people don’t seem to need support can be seen as something positive though. Or as a sign that the community has not really evolved around this page.

With 150 posts per day, Kroger is the company that has to respond to the most customers. They only react to 26% of those though, but at least do so within 12 Minutes on average. Which implies that they are willing to help and do so whenever they can. But why does a page this small (in comparison to for example Walmart) gets the attention of so many people?

Almost every single yellow dot is a complaint about the same thing. People are so upset that Kroger allows their customers to carry guns while shopping at their stores, that they are flooding the fan page with negative feedback. Which proves that the page provided an excellent level of support. The statistics simply are distorted due to the huge influx of hate mails, something the Social Media Manager can’t do anything about, neither do they have a way to properly react to them.

Next up: Content. Smaller companies generally post the most. Yes, Walmart and Aldi are up there with 3.6 and 2.7 post per day respectively, but the rest of the top 10 consists of supermarket chains that have less than 50k fans. MyCountyMarket (3.9) and Pick N Save (3.6) are leading the charts. Strack & Van Til (3.2), Natural Grocers by Vitamin Cottage (3), Chief Super Market (3), Food City (2.8) and Schnuck Markets (2.7) are also pretty eager to share their thoughts. But how successful are they?

First of all, it’s really interesting to see that the content that is posted towards the end of the week is the most successful. It seems like most people don’t really pay attention to grocery related content when their fridge is still stuffed. But starting Thursday most fans start to care again. Probably because they are checking the Facebook pages for discounts. The top posts mostly consist of lotteries and discounts. We’re giving away TEN $100 ALDI gift certificates once we reach 1,000,000 Facebook fans – that’s a lot of quarters. To unlock the chance to win, SHARE with your friends on Facebook and help us get there!

But once in a while you can also spot different topics, such as recipes… Get food prepping tips for back to school along with a mouthwatering Ham Balls recipe by Share & Remember: http://cbi.as/k4081 Here it is! Jerry & David Golub’s #IceBucketChallenge to #StrikeOutALS in memory of their father, Lewis Golub. Price Chopper will donate $1 for every like on this post up to $10,000 for the next 24 hours- go!

Another interesting fact: Most customers seem to be loyal. We had trouble finding a page whose users are actively posting on the fan page of one of their competitors. Walmart is a an exception. But even a company as big as this one seems to have pretty committed fans. 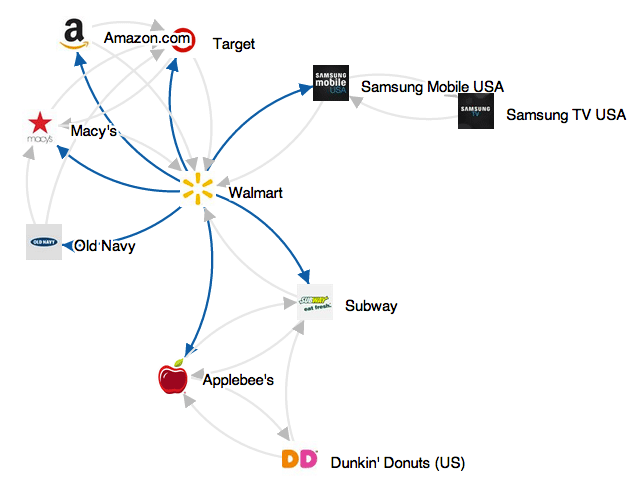 The only direct competitor in this graphic is Target, the second biggest supermarket chain in the US. The rest are companies from a vast amount of different fields who don’t provide the same service that Walmart does.

It seems to be less about finding the best deal for every single product rather than shopping at a place you trust.

What’s really impressive is the amount of content these pages publish on a daily basis. Walmart for example tweets 377 times a day, which is a pretty ridiculous amount. This usually indicates that a company uses their Twitter account as a tool to answer customer support questions.

98.9% of Walmart tweets are a response to someones question. Almost the same applies to the accounts of Publix (47 tweets per day) and Safeway (30 tweets per day). The content most pages publish performs pretty poorly. With 0.1% average engagement they reach one in one-thousand users per tweet.

Target for example publishes a lot of content and takes a more personal approach in terms of topics. They aren’t just tweeting messages that are supposed to answer the questions of their customers, neither to they publish a lot of product related content.

It seems to work or else they wouldn’t have the most followers of all supermarket chains.

American supermarket chains differ pretty heavily from one another. While a lot of them still have the same objectives on Facebook this isn’t the case on Twitter anymore. Some use it as a support platform, others to simply publish the same content they already posted on Facebook. You even have a group companies that tries to be a customers best friend by constantly making jokes and posting cat-content.