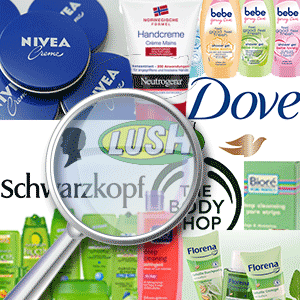 On this day in 1836, Paul Carl Beiersdorf was born. For those of you who don’t know, Beiersdorf was a German pharmacist who founded the famous skin care company “Beiersdorf AG” in 1882, which still thrives today with well-known products such as Nivea, Hansaplast, Labello and Eucerin. In honor of this day, we made a ranking of 30 skin care and cosmetic brands and compared and analyzed them for you.

The company with the most fans on our list is Dove with 13.3 million. However, they may not be the company with the most fans overall, seeing as many of the companies on our list are only the German fan page, while others, such as Dove, are the international page. Dove, therefore, have a wide range of fans in terms of nationality. Their fans dispersed across at least 26 different countries, with the majority from Brazil with 25.1% of fans. It was rather strange to find that the majority of fans for pages like Dove or Vichy were from places like Brazil and India. Because this was such a peculiar result, we looked further and found that Vichy also had a German fan page. Thinking we would now find mostly German fans, we were surprised to discover that 70% of the fans were from Georgia. Needless to say, that did not really solve our confusion.

The average engagement rate of the fan pages listed is 0.2%. The company with the highest engagement rate is Dr. Grandel with only 1%, which also has the lowest number of fans at 1,900. They also have the highest post interaction rate with 3.1% and their service level is an impressive 100%, which means that they react to all of their fans’ wall posts. Thus, because of their commitment to their fans and their page, they have a higher engagement rate. Is it easier for them because they don’t have a large amount of fans to connect with? Is the engagement rate really affected by the number of fans? Find out more here.

Rimmel London had the second highest engagement rate. We explored the summary of their data to see what types of posts attract the most attention. wWe found that the phrase “Like if you…”, which can be seen here, here and here, posted together with a picture brings in the most Likes. It’s a simple and easy way of engaging your fans and it works.

The service level is used to see how many posts from fans the fan page reacted to in terms of likes, comments or removals. The average service level for this group of companies is 69%. As previously pointed out, Dr. Grendal has the highest service level with 100%, followed closely by Garnier Deutschland with 97%. Dove, the fan page with the most fans, had only a 3% service level, which was the lowest rate available, seeing as the data from 7 of the 30 fan pages were listed as “not available”. This is probably because they didn’t receive any posts from fans.

The average growth rate of the companies listed is about 2.65% per week. The company with the highest growth rate of fans is Vichy with an incredible 30.66%. Curious as to why this is, we turned to the data concerning their fan page. According to the graph on their growth of fans, we see that Vichy experienced a large boom of over 1.8 million fans mid-march of this year. How did they gain so many fans in such a short time? Was it because of good marketing? According to one of our recent studies, engagement rate has a positive effect on the growth rate of a fan page. So is it possible that their engagement rate had something to do with it? We took a closer look and found that they have one of the lowest engagement rates with 0%, an obvious outcome of their average amount of 0 posts per week. According to this data, we can probably rule out the effect of fan engagement on their sudden growth spurt. Knowing that something was also strange about the majority of Vichy’s fans from their German page coming from Georgia, we took a closer look at their fan page. Because Vichy uses the Global Pages feature on Facebook, it is possible that they adjoined their pages and so gained lots of fans overnight.

You can embedd the ranking in your blog or website by using this code: