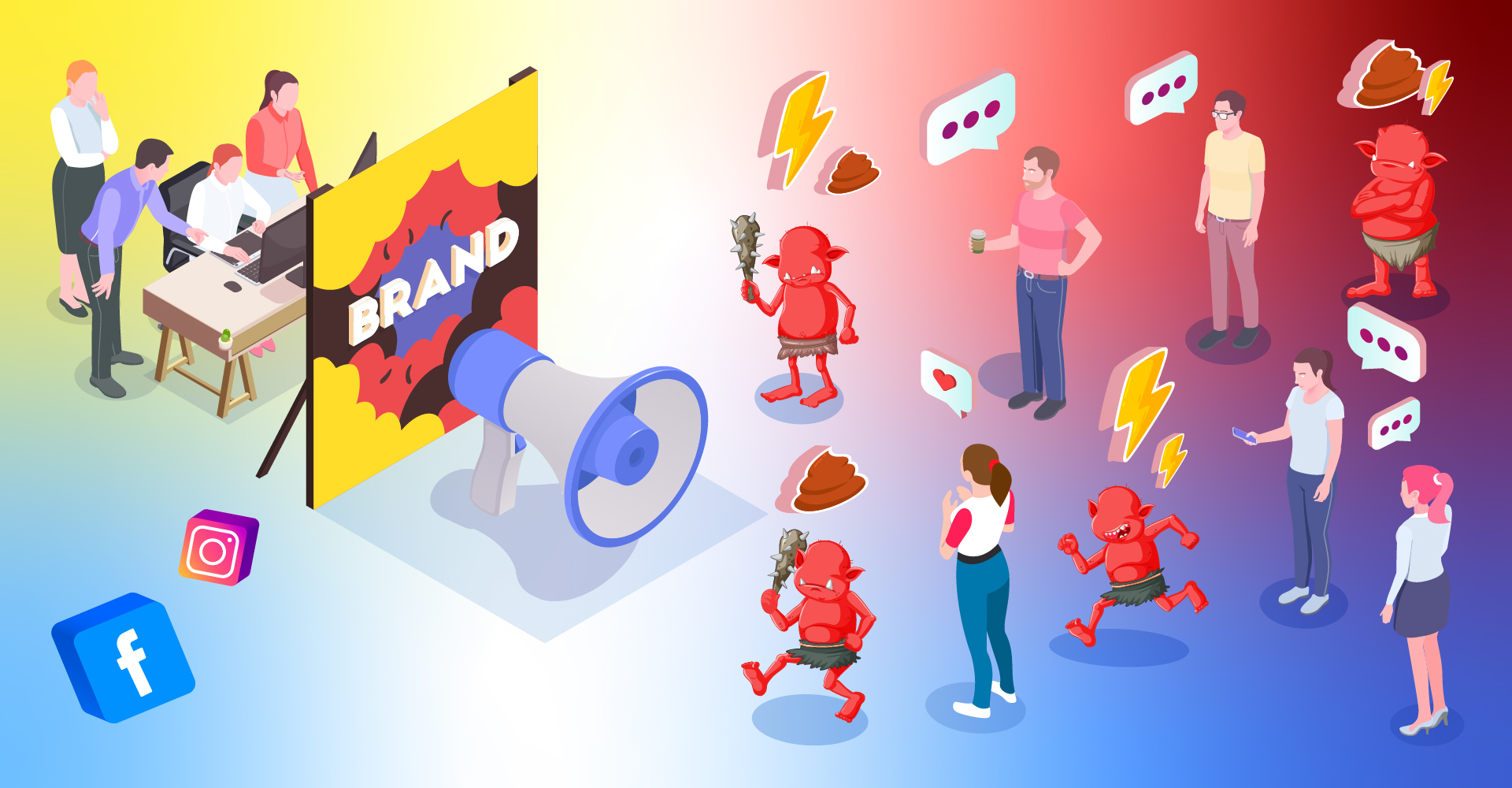 They are everywhere and know it all better. We all know them: the trolls and the naggers. But how do you deal with troublemakers on social media? In this article, we will show you how to use community management to handle users who cause trouble on the net with supercritical comments. You will learn how to build a successful strategy for your professional online communication and how to protect your corporate image from negative influences and shitstorms.

We will cover all relevant information about trolls and naggers, how to identify them and give you 10 tips on how to deal with social media trolls.

What are Trolls and Naggers?

The Internet is full of people who want to share their opinions. Naggers are users who share their critical views on social media platforms, but don’t deliberately provoke or become insulting. Trolls, on the other hand, are users interested in only one thing: getting attention, upsetting people and releasing anger. Silently ignoring such discussions on your profiles is no alternative in community management. Discussions on social networks take place anyway and in worse cases, without you noticing. Trolls and naggers cause uproar and influence the perception of your company by sharing their negative comments.

How to Identify Trolls and Naggers?

Dealing with trolls and naggers in community management requires identifying and clearly distinguishing between them. Is it a troll or a nagging user? Sometimes it’s hard to tell whether a critical comment comes from a troll or a nagging user. Try to listen carefully and think about the motivation behind their comment. Do they appear frustrated, stating seemingly authentic comments about your business or do they sound outraged, seething and trying to trigger a shitstorm? If the latter is true, you’ve got yourself a live, social media troll.

The following example will show you how a troll behaves on social media. In the post below, the fast food chain Wendy’s is advertising the quality and freshness of their products on Twitter. A troll reacts overcritical to the Twitter post.

The troll accuses Wendy’s of lying  and claims that everyone would know that their meat is not fresh but frozen. The social media team reacts unruffled and responds in a moderate manner with facts to the overcritical accusation.

Even after the response, the troll does not stop and keeps arguing. To the provocative question whether Wendy’s would transport their meat raw in a warm truck, the company responds with a humorous counter question.

However, the troll ignores Wendy’s response, strikes again and even tries to involve Wendy’s competitor McDonald’s – without success. You could say that Wendy’s got a bit carried away in their last response as they shoot back by beating the troll with his own argumentation. In the end the company stops the troll by logically disproving his argumentation. Sometimes we suggest taking a more friendly and humorous tone. The thread shows how obstinate trolls can be and gives you a first impression how to handle such situations.

We have compiled 10 tips to help you deal with trolls and naggers in community management. Our tips will guide you to react professionally to the critical voices on social media. You will also learn how to deal with shitstorms in a clever way. Always pay attention when you are talking to a troll or nagger and act carefully.

Most social media networks have community guidelines for respectful interaction. Create rules of conduct for your own platforms. That way you and your co-worker will know how to react when a troll composed a nasty comment. Point out what your rules are and remind your followers about the community policy of each network, to remind them of acceptable behavior.

The social network Instagram, for example, has also established concrete guidelines. The “community guidelines” are intended to support respectful behaviour within the community.

Tip 2: Keep your Strategy in Mind

Set clear rules for dealing with your community in your social media strategy. Clear rules will help you and your team to make decisions and clearly align corporate communications. Define how fast you want to react on each social channel, when users are blocked, and how you want to deal with conflicts. Your community management should always aim to respond to positive comments by responding with appreciation. If problems occur again and again, you should adjust and update your rules to be able to react in the best possible way. It is helpful to develop best practices and always keep in mind that each user is treated individually and does not want to receive a standard response.

We’ve improved Fanpage Karma so that you can process messages even faster and easier. Find out all about the new features here https://blog.fanpagekarma.com/2020/07/15/new-features-for-your-community-management/

The basic rule when dealing with trolls is: “Do not feed the troll!”.  Don’t let their posts provoke you and don’t start discussions with them. Do not give critical voices a stage, because they are usually not open to your arguments. So try to stay calm and answer to their comments objectively referring to concrete facts. Keep a cool head and with a bit of luck, naggers and trolls will troll around because they don’t get the attention they want.

If you are confronted with false information, rumors or lies, react with concrete facts to those false statements. If your company has made a real mistake or if a real problem is being addressed, it is advisable to offer a sincere apology and a solution to the problem. Especially trolls tend to exaggerate and generalize. Facts show how big a problem really is and disprove the argument in a clever way.

The post of the digital communications company O2 shows how a nagger complains about the company via Twitter. O2 reacts competently, deals with the accusation in a friendly way and provides the clarifying facts. In this way, O2 shows how to deal with criticism transparently on social media platforms and how to respond politely to accusations.

Easier said than done. Humor will help you respond to negative comments and absolute misstatements. That way, humor can humanize your brand and diffuse a situation. Successful handling will not ignore the troll. Recognize the problem and respond to criticism in an original manner. As a matter of principle, try to maintain a friendly, objective, and professional tone. This will create a positive atmosphere in your community and a sympathetic brand image.

Here, the retail chain Sainsbury’s shows how to deal with negative comments using humor and creativity. As a user complains about the company on Twitter, Sainsbury’s responds with great humor. Use critical comments and turn them into funny posts which, with a bit of luck, will meet with the broad approval of your users and become top posts.

Not every critical comment wants to spread and incite a negative image of your company. Ask yourself if the criticism is correct, take it seriously and react in a professional way. Sometimes it is wise to apologize and present a solution to the user. If something goes wrong in everyday business, it is important to inform affected users and prevent possible criticism. But if you think a user is wrong, clarify the situation and provide the necessary information to deal with it objectively and correct any misstatements.

Consider whether a user has gone too far and the comment should be reported and/or deleted. Many social media trolls are annoying, but often harmless. However, if a troll goes too far and shares threats and false statements, you should take a closer look. In this case, you should get a second opinion from your team and agree on the next step. It is advisable to avoid deleting comments, as situations can escalate and intensify negative reactions. If trolls clearly violate social network policies, you should inform the network and block the troll’s account.

Tip 8: Hide Comments at Night and on Weekends

Reacting in time on negative comments will help you prevent upcoming shitstorms. Times of the day when you are offline on social networks and cannot react are difficult. Hide comments and user posts outside business hours to be available in difficult situations. Social media tools like Fanpage Karma will help you manage your messages efficiently. This tool will allow you to automatically check messages for specific keywords and hide certain comments directly. You can also hide messages that arrive during defined time periods automatically. This gives you more control over the interactions on your social media profiles.

Not all criticism is a shitstorm. Ask yourself whether criticism is justified when many users express their indignation. If there is a flood of negative comments on your profile, which are not objective and insulting, you are most probably dealing with a shitstorm.

A shitstorm does not happen suddenly, usually there are first signs. A critical amount of comments posted under a post can be a sign. It can also be alarming if the same user posts many negative comments under your posts in a short period of time. If other users react just as critically in such situations, you should intervene immediately. Here, shitstorm alerts help you to react quickly by notifying you automatically in case of unusual high activity. If you are confronted with a shitstorm, remember: “Don’t be afraid and stay calm!”.

Build a friendly and helpful community. If you react quickly and with care to troll posts, you can earn the trust of your users. Convince users, turn them into loyal followers, and build up a supportive community that supports you. Loyal fans will join your side and assist you in critical discussions. That way you make trolls’ lives difficult and ensure that they troll themselves through the help of your community.

Trolls and naggers are part of your daily community management routine. Prepare yourself and integrate your actions into your social media strategy to ensure clear guidelines to dealing with critics. Our tips will help you to react efficiently, identify trolls and protect “normal” users from negative influences with the right measures. Ignoring trolls and naggers will not help. Stay calm, take criticism seriously and delete comments with care. A humorous and authentic online communication will create a positive social media presence and convince new followers from your company.