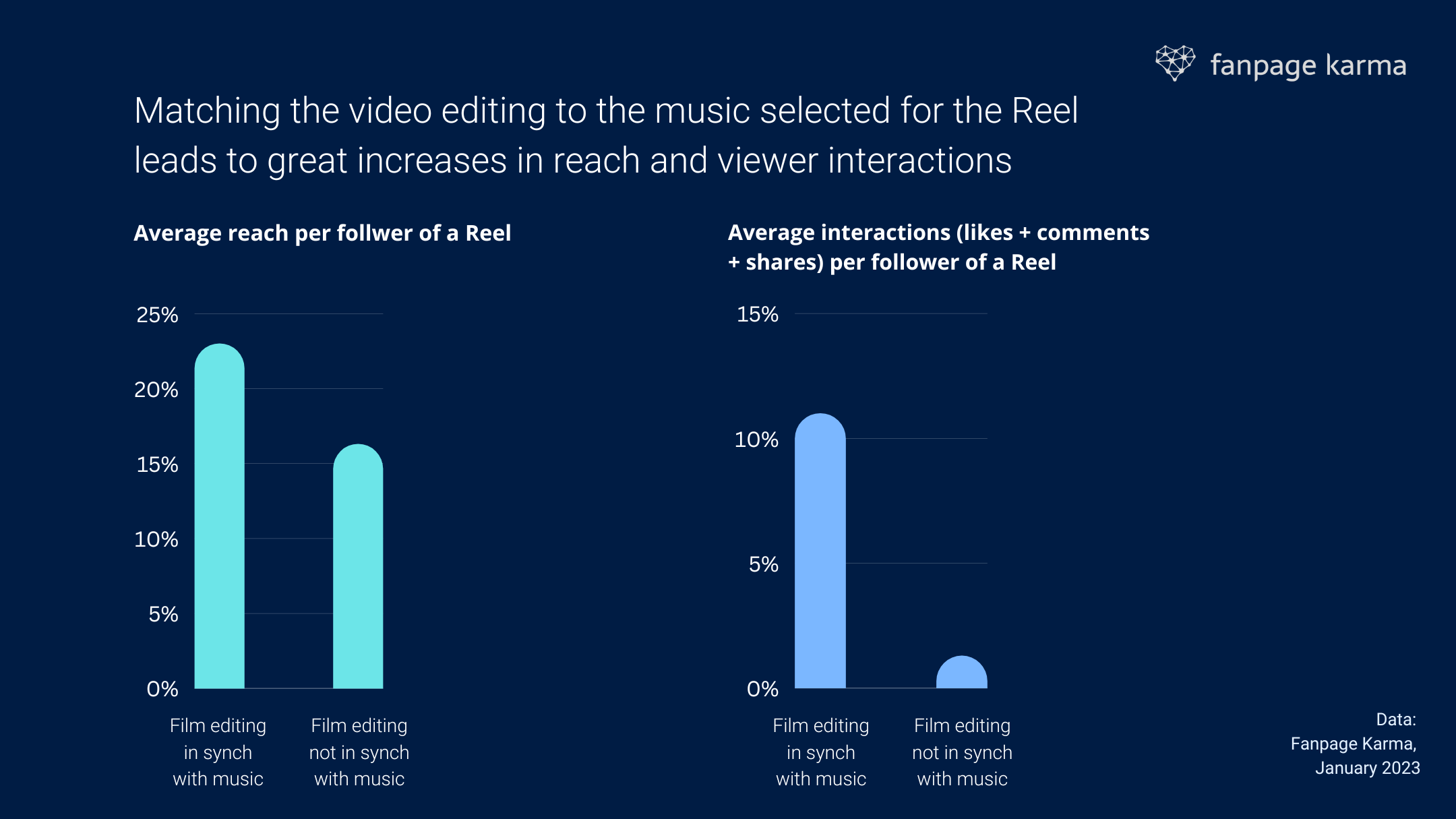 Should you use music in your Instagram Reels? And if so, how? We have analyzed hundreds of Reels. In today’s article, we dispel all the rumors about using music in Instagram Reels, and show you what you can really do to increase the reach and engagement of your Reels.

What’s in it for you

Adding music increases post interactions, but not the reach of a Reel

As our study on Instagram Reels shows, the use of music does not increase a Reel’s reach. This is very surprising and contradicts many common theories circulating on the Internet.

Nevertheless, the speculations are not completely pulled out of thin air, since it turns out that viewer interactions increase very strongly when a Reel contains music. Music moves people, and a song that matches the content of a Reel underscores its message, which drives up viewer engagement. This results in an average of 200 percent higher interaction rates for Reels that make use of music. Even if it doesn’t lead to higher reach, music has a significant impact on how many likes and comments Reels get from viewers.

Use music, not sounds, in your Reels

Sounds and noises are not all the same as music. This is true for Instagram Reels as well. Instead of using music, some content creators try to include creative sound effects, nature sounds, engine sounds, and much more in their Reels. These can be sounds  while shooting the video (e. g. engine sounds when filming cars or chanting fans in the background of a Reel filmed in a sports arena), or effects added in post-editing, such as the sound of a flowing river, chirping crickets, etc.

But such noises and sound effects do not contribute to higher Reel reach and likes, as our study shows. On the contrary, Reels with music achieve nearly seven times as many viewer interactions and 55 percent higher reach than Reels whose audio content consists of sound effects or other, natural sounds.

Furthermore, as we compared Reels with sounds to Reels with no music at all, we noticed that using sound effects in Reels leads to significantly worse engagement and reach than using no music at all, too. 35 percent lower reach and 56 percent fewer viewer interactions strongly advise against using natural sounds and instead either talking to the viewer or just using music in one’s Reels.

But if using music in general fails to lead to higher reach of a Reel, is there perhaps a particular type of music that increases reach and is particularly well received by viewers?

is particularly well received among Instagram users, it turned out that Reels with sentimental music actually achieve higher average reach than their counterparts. Such Reels display on average 31 and 62 percent higher reaches, respectively, than Reels employing energetic or soft, relaxing music.

Looking at post interaction rates, however, the picture changes. Here, Reels with energetic music perform 37 and 44 percent, respectively, better than the other two types of music. Reels with calm, relaxing music show slightly higher viewer interactions than Reels with sentimental music, but the differences between them are negligible (1.9 percent to 1.8 percent interaction rate).

Holistically, increases in viewer interactions can be achieved with all three types of music. Increases compared to Reels without music range from 64 percent for sentimental music to 136 percent for energetic music.

Nevertheless, only Reels with sentimental music also manage to achieve significantly higher average reach (+24 percent) than Reels without music. This cannot be said of Reels with energetic music (- 6 percent) and Reels with calm, relaxed music (- 24 percent).

Popular and trending music increases reach and engagement of Reels

In addition to the different types of music, we studied whether Reels that use particularly popular songs perform better than Reels with less frequently used songs. We considered a song to be “popular” if it had already been used in more than 100,000 Reels (as of 6/1/23), which was true of nearly 10 percent of all Reels analyzed.

If you want people to interact more with your Reels and for your Reel to reach more people, make sure that from now on you will use popular and trending songs in your Reels.

And here’s another quick tip: trends change quickly. Content producers need to keep an eye on what topics and songs are popular on the platform. To find trending songs on Instagram Reels, look out for a small arrow-icon. If a Reel uses a currently trending song, it will be indicated when viewing the Reel in full screen. Here, you will find a small upward-facing arrow in the bottom left corner of the Reel, right next to the audio name. Keep an eye out for this arrow icon in your next Reel session, and make sure to save popular songs for your own Reels in the future. But don’t wait for too long, because music trends often do not last very long.

Yet the most astounding insight to emerge from our study on music is the following: matching the video editing to the music selected for the Reel leads to increases in reach of a Reel and viewer interactions go through the roof. As our study shows, average reach is 53 percent higher on average. And viewer engagement is an impressive 746 percent higher than for Reels where the film cut doesn’t match the rhythm of the music.

Unfortunately, since this signifies more effort for content creators when creating Reels, only eleven percent are currently paying attention to this crucial aspect. However, this also proves that there lies great potential for those who are up for putting in a bit more effort. With a well-thought-out video edit that matches your music, your Reel gives an overall harmonious and coherent picture, which is richly rewarded by your audience.

In the future, try to pay special attention to matching the film edit to the song you chose and watch how your Reels will achieve higher reach and soaring engagement.

Conclusion: make use of music

Should you use music in your Reels or not? The answer is: Yes. But, as so often, it also depends on how you use it.

While many theories – especially regarding the benefits of certain types of music – have not been confirmed, it turns out that reach and engagement are especially higher when the editing of the film matches the music used and the Reel gives off a harmonious overall gestalt. The use of popular songs also increases reach and viewer interactions. However, you should avoid Reels in which there is no talking or music. Nature sounds, fan chants, or engine sounds may seem natural, but they don’t resonate with your viewers.

Also check out our other blog posts on how you can increase your following and reach through Instagram Reels.